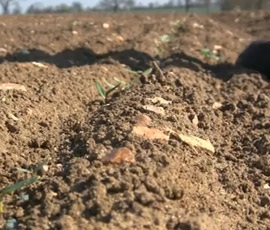 Concern is growing over this year’s sugar beet crop, with erratic emergence on eastern region farms.

Growers are being urged to assess crops on a field-by-field basis and redrill as soon as possible where necessary.

Farmers have reported erratic establishment of sugar beet – especially in early drilled crops of Cayman. Seed breeder Ses Vanderhave said there was no indication the variety was to blame.

The NFU said it had received information from growers about some other varieties, too.

The situation was developing rapidly and it was too early to say what is causing the problems, said NFU chief sugar adviser Ruth Digby.

“Fields affected have very low plant populations and even where crops have emerged there is very little root growth, which suggests plants won’t survive.”

Many factors may be contributing to the situation and it remains unclear what is causing these effects, said a joint letter sent to growers from British Sugar and the NFU.

“Crops that have reduced populations but are deemed economically viable should be managed with careful consideration of all external factors,” it said. “Crops that have been affected by frost, wind-blow or grazing will require particular care in management.”

“Talk to your British Sugar area manager and your agronomist if you think you have a problem. We are still in the process of trying to determine what the problem is.”

Growers with beet populations below 40,000 plants/ha are being urged to redrill crops as soon as they can – but only after consulting British Sugar.

“It is becoming apparent that there is a low and erratic or poorer emergence with some crops,” said the British Beet Research Organisation (BBRO).

This is a complex issue that appears to involve many interacting factors related to the seed, soil, time of drilling and prevailing weather at the time of sowing,” it said.

“Information is still being gathered directly from farms and laboratory tests are also being carried out.”

Affected crops appeared to be in the range of 40,000-65,000 plants/ha, but lower figures have been recorded.

In addition to emergence, vigour had also been an issue. On closer inspection, stems and cotyledons appeared to be distorted and twisted.

In some cases there was little root system, and the start of the proliferation of fibrous roots without a main tap root.

Growers with affected crops should keep records and take photographs, both at field level and of individual plants to allow assessment of below-ground effects, said the BBRO.

“If plant stands are below 40,000 plants/ha, or your agronomist verifies that there is no root system, then we would recommend that you redrill as soon as possible.”

Farmers Weekly has contacted British Sugar for comment, but has yet to receive a response.