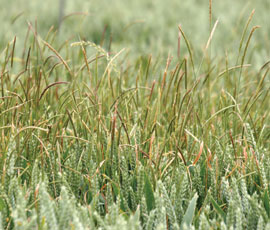 Agrochem company BASF is teaming up with consultant ADAS to offer 100 growers the chance to win a free blackgrass herbicide resistance test in a prize draw this summer.

BASF conducted a survey of 80 growers last year, which revealed that the main reasons for not testing were cost, that it was believed unnecessary or that farmers were unsure how to sample correctly.

This alerted the group to the fact that growers needed to be encouraged to test their blackgrass populations and offered advice on how to seed sample.

BASF cereal herbicide manager Sarah Mountford-Smith points out that growers are making assumptions of their blackgrass resistance status without testing.

“As a manufacturer we believe we have the responsibility to highlight the importance of testing and help growers get the most out of the available tools,” she says.

ADAS researcher Lynn Tatnell believes it is very important to get a picture of what herbicides will be effective in fields to aid both the short- and long-term management of the widespread weed.

“We would advise growers to test at least every five years, but we would prefer for it to be more like three years,” says Dr Tatnell.

With so few options left in the herbicide armoury, growers are encourage to understand which active ingredients fit into which group and ensure they are using the right combination to achieve maximum control.

ADAS offers a £200 commercial test for a complete analysis, including enhanced metabolism and target site resistance to ALS and ACCase inhibitors.

There are also tests for blackgrass ALS resistance only (£150), ACCase resistance in Italian Ryegrass (£125) and a general resistance test for wild oats (£100).

Dr Tatnell says that sample quality is vital and a small mugful would be the ideal amount to ensure that ADAS has enough viable seed to test.

Growers should keep each field separate, as the resistance status can vary from field to field and if only sending one sample, pick the worst field where ALS and ACCase chemistry has been used edge to edge.

“The bigger the area, the better the sample and keep moving through the areas of blackgrass for at least two to three tramlines, gathering small amounts of seed as you go,” says Dr Tatnell.

Seed must be mature, brown and from the middle band of the head and fall out with a gentle touch, which is usually in the second or third week of July.

Once collected seed should be kept in paper and sent into ADAS Boxworth as soon as possible to ensure results arrive this autumn, with growers notified of results via email.

Winners of the 100 free tests will be able to discuss the results of their test with ADAS and BASF experts.

You can apply for your free blackgrass test here. More information on seed sampling can be found on the Weed Resistance Action Group (WRAG) website.