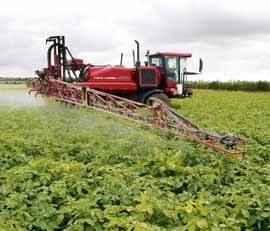 T0 wheat fungicides are in full swing, barley crops are about to receive a T1 spray and potato planting is making good progress, according to our Crop Watch agronomists.

In Wiltshire, wheat had not suffered from early yellow rust infection, meaning the T0 fungicide could be applied at the conventional GS30 to 31 timing, said Dan Dines from Wessex Agronomy Services.

“Hopefully this will mean the interval between T0 and T1 can be kept to three weeks or fewer. The T1 will be targeted at 75% emergence of leaf three, but weather and workload will ultimately dictate when it is applied.”

Recent rain had brought out a flush of broad-leaved weeds in some cereal crops, he said. “Where the T0 has already been applied, a herbicide will be included with the T1.”

Spring oilseed rape and linseed drilling had largely been completed in the area, but growers needed to monitor crops for flea beetle every two days, he said. “This can be very damaging until the crop becomes well established.”

Further north, net blotch, rhynchosporium and some brown rust was creeping into susceptible winter barley varieties, said Arable Alliance agronomist David Martindale, from Yorkshire. “The T1 fungicide will largely be based around prothioconazole, mixed with either a strobilurin or the new SDHI chemistry. Herbicides are also being included to control broad-leaved weeds such as cleavers.”

Winter beans were beginning to recover from the challenging winter, but were starting to suffer from pea and bean weevil damage, he noted. “Although the damage from the adults on the leaf can be sustained, it is the subsequent larval damage on the roots where yield losses will occur most.”

Emerging spring beans and peas were also susceptible, so growers should treat with an insecticide if required, he said.


In Buckinghamshire, oilseed rape was between stem extension and yellow bud stages and was suffering from pollen beetle attack, said Swaran Bachoo, an agronomist for Agrovista. “They are at the threshold level of 15 beetles per plant in many fields. If the threshold levels have been exceeded, then a pyrethroid product or Biscaya (thiacloprid) can be used.”

The latter was effective against the resistant type of pollen beetle, he added.

In dense crops where the green leaf area (GAI) was expected to exceed 3.5 he was advising growers to apply a plant growth regulator fungicide, which would hold the crop back. “This is also the time to consider the threat of sclerotinia – remember that all the sclerotinia fungicides are protectant only and need to be sprayed before infection occurs on petals.”

Many barley crops in Lincolshire were approaching GS30 and would soon receive their T1 fungicide applications, said Farmacy agronomist Philip Vickers. “Most treatments will be prothioconazole/strobilurin-based, but on some of the high-potential crops, programmes will be based on new SDHI chemistry.”

T0 wheat fungicides were in full swing and most forward rust-susceptible varieties had been treated. “Some of these T0 treatments included trinexapac-ethyl to encourage rooting, as well as manganese to correct deficiencies.”

The more forward wheat crops were also being treated with an appropriate dose of chlormequat, he said.

“There is an interesting array of weeds currently emerging in some wheat fields. These include redshank, docks and thistles, which will be treated in due course.”

Soil conditions had been ideal for potato planting and growers were close to finishing, said SAC agronomist John Sarup.

But the early spring had caused some problems, particularly regarding seed supply, with some growers still waiting for deliveries, he said.

“I often have discussions with my clients about getting seed in early (pre-Christmas) and managing it so that they can get the best out of it, but the problem always comes back to having suitable storage, especially CIPC-free storage.”

Growers who had invested in purpose-built seed storage would be reaping the benefits this year, he said. “Not only by paying pre-Christmas prices for their seed, but also by having the seed on farm when soil conditions are most favourable.”