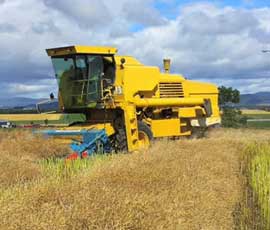 Harvest progress has been steady this week as showers frustrate growers, but the majority of the winter barley is finished at farm average yields.

It’s estimated that around 5% of the wheat harvest is now complete, but there is a considerable chunk of the oilseed rape cut, including Martin Smart’s on farm trials near Trowbridge, Wiltshire.

He sent in some eye catching aerial footage of his Claas Lexion working through the dozen or so varieties that he trials to assess which are most suited to his business.

Away from combinable crops, Mark Botright in West Dorset has finished his eight-week garlic harvest, picking up around 500,000 bulbs for restaurants and retailers.