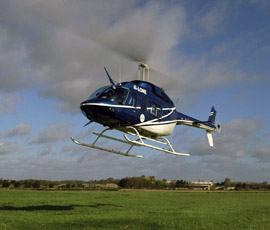 Farmers Weekly and leading industry experts took to the air in the Crop Doctor helicopter to assess wheat disease risk across the country. Adam Clarke reports the findings

As the Crop Doctor helicopter flew between sites in Yorkshire, Lincolnshire, Herefordshire and Oxfordshire, the huge variation in crops was glaring.

The calendar has been thrown out the window for many growers, as even the most forward crops will struggle to reveal flag leaves by the mid-May norm.

The most backward crops have missed the T0 timing and are reaching the T1 fungicide timing.

Scottish Rural College (SRUC) crop protection team leader Fiona Burnett says septoria inoculum is present and even where it isn’t visible on upper leaf layers, growers should aim to keep it that way.

“If the correct conditions arrive – and catchy weather isn’t a rarity – then the septoria could really take off. The weather is the driver now.”

Even humid conditions or heavy dews can result in the disease spreading through leaf rub, particularly in short canopies, adds Dr Burnett.

She points out that cutting back on fungicide is a dangerous game, even in the thin and backward crops that can be seen so clearly from the air.

“You may only have half the yield potential in some of these wheats, but do you really want to halve that again through poor disease control?”

She advises growers to identify full flag leaf emergence for the T2 spray, which drives the majority of crop yield potential.

The best SDHI + azole formulations will give up to a week “kickback” of curative activity for septoria on leaf two, in addition to keeping the flag leaf clean.

“I would urge growers to bite the bullet and treat with an SDHI co-form on the flag leaf, with most varieties having relatively weak septoria resistance,” she says.