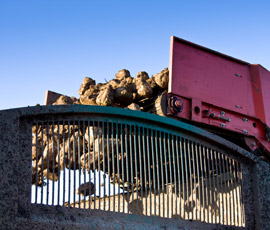 Farm leaders are to meet British Sugar in a bid to resolve the impasse over sugar beet prices.

Talks between the two sides are due to take place on Tuesday (30 July).

It follows a six-week standoff over British Sugar’s proposed price to farmers for the 2014 beet crop.

The talks come days after more than 440 farmers attended two meetings organised by NFU Sugar in Nottinghamshire and Norfolk.

Farmers have rejected British Sugar’s offer of £30.67t for the 2014 sugar beet crop, insisting that it fails to reflect the risks associated with growing sugar beet.

Growers would normally be expected to sign contracts to supply beet to British Sugar by 31 July.

Instead, farmers representing some 5,342,475 tonnes of sugar beet have pledged their support to the NFU Sugar campaign for a better price.

“The enhancement of £3/t to the agreed contract price is a direct result of listening to representations the NFU have been making to us over many months and is why we are disappointed and surprised that we have not yet reached consensus.”
British Sugar

Supporters include many of the biggest beet growers in East Anglia.

David Black, chairman of the Bury Beet Group of farmers, said £30.67/t was not enough for the group to continue growing the amount of beet it had produced in the past.

Andrew Blenkiron, manager of the 4,400ha Euston Estate, near Thetford, said he was prepared to grow 16,500t of sugar beet for anaerobic digestion rather than selling it to British Sugar.

In a statement, British Sugar agriculture director Colm McKay said the price offered by the processing giant was a fair one.

“Our discussions with the NFU are on-going and our objective remains to pay a fair and competitive beet price to our growers without undermining our future competitiveness as an industry.

“The enhancement of £3/t to the agreed contract price is a direct result of listening to representations the NFU have been making to us over many months and is why we are disappointed and surprised that we have not yet reached consensus.

“We believe these prices will deliver a significantly positive margin in favour of beet versus the alternatives and with alternative crop prices falling, that margin is increasing further.

“Our only request before any grower makes a final decision is to complete their margin calculations to ensure they are basing their decision on the competitiveness of the crop.”