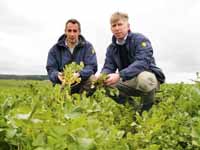 Hot mustard and radish biofumigant crops have shown promising results for reducing root invasion from potato cyst nematode, but there is little information and advice for growers wanting to slot them into a standard rotation.

This was the problem facing Shropshire agronomists Andrew Wade and Luke Hardy from Agrovista, so three years ago they decided to start growing the crops in field-scale trials, with support from Agrovista, Harper Adams University College and Plant Solutions.

“It has been a steep learning curve,” says Mr Hardy. “No one could tell us exactly how to grow the crops, so we’ve had to experiment with several different varieties and different planting times.”

Together the pair has trialled two completely different approaches to growing and incorporating biofumigant crops. In the first year, Caliente 99 mustard was established in July, immediately after winter barley, and was macerated and incorporated in October, says Mr Hardy.

“The advantage is that you get a really good crop, which can be macerated and incorporated in the autumn,” he says. “But the downside is that the isothiocyanate gas is being released a long time before the crop is planted.”

This approach means the crop can be grown between a cereal crop and potatoes without having to adjust work patterns, but the biofumigation effect may be reduced, he says.

Also, early harvesting of the previous crop is crucial, as the crops might struggle to reach maturity if they are planted too late. This means the technique is best suited to a post-winter barley slot, he says.

This season, they took a different approach, planting a mix of brown mustard and oily radish crops on 10 September and over-wintering them for spring maceration.

The main benefit of over-wintering is that the crop is incorporated just before planting, providing peak isothiocyanate gas release as the potatoes go in. It also ticks environmental boxes as there is ground cover throughout winter, he says.

But getting the crop to survive the winter and reach maturity before potato planting commences are both significant challenges.

Most of the brown mustard failed to reach maturity and a significant proportion was killed off completely, says Mr Wade.

All four of the September-sown radish varieties survived the harsh winter, but they had only just reached maturity at the yellow bud stage in the first week of April.

“This meant the farmer had to delay planting and the maceration and cultivation increased the workload at an already busy time of year.”

Bento was the most advanced of the four fodder radish varieties, just reaching the yellow bud stage in early April.

In a milder winter there could be a greater chance of the crops reaching maturity earlier, says Mr Wade. Sowing earlier in the autumn will produce a larger plant going into the winter, but this will be most susceptible to frost damage, he explains.

With both approaches, thorough maceration and incorporation is crucial to give the maximum level of biofumigation, says Mr Hardy.

All crops were macerated using a front-mounted topper, followed by a rotavator on the rear of the tractor. “This ensures the plant material is finely chopped and the maximum amount of gas is released.”

To keep this gas in the soil as long as possible, the field is subsoiled, ploughed and pressed immediately, he adds.

“The gas is released instantly when the crop is macerated, so you need to bury the material quickly and make sure it doesn’t escape.”

The crops will not perform unless they are treated as a proper crop and fed accordingly, says Mr Wade. “This season we have applied 80kg/ha nitrogen, 30kg/ha sulphur and three litres of manganese.”

This adds to the input cost, but roughly 60% of the nutrients applied will be available to the following potato crop, he says.

“We normally top-dress potatoes with nitrogen at tuber initiation, but we won’t need to do that with these crops.”

This summer the trials will be replicated and soil tests will be carried out to identify the true impact on root invasion.

The crops will be established immediately after the current winter wheat crop to see if they will be able to reach maturity by the end of the autumn. “We will use pre-harvest glyphosate to make sure we can drill as soon as possible and we should be able to get about 12 weeks growth before maceration.”

Growing a biofumigant crop requires a significant investment, with seed prices ranging from about £65/ha for the cheaper brown mustard varieties to £100/ha for fodder radish, says Mr Wade. “I would say a fodder radish crop adds about £150/ha to the cost of growing the potato crop.”

But all five growers participating in the trials have been pleased with the results and are continuing to experiment this year, he says.

Evidence collected so far suggests biofumigant crops will not be capable of replacing nematicides, but they do offer added control and significantly improve soil structure and organic matter levels, he adds.

Disease has not been a problem, but because the crops are in the brassica family, they are monitoring for signs of clubroot where they are being grown in an oilseed rape rotation. “We don’t know what influence these crops will have on clubroot, and they might even reduce risk, but we need to keep a close eye on it.”

Isothiocyanate is a natural gas released from the tissues of brassicas such as radish and mustard.

The gas is produced when plant cells are crushed or chopped and compounds called glucosinolates come into contact with an enzyme in the presence of water.

The gas is thought to suppress a range of soil-borne diseases and nematodes such as potato cyst nematode, but research into the true benefits is ongoing.

In the first year of the Shropshire trials, root invasion from potato cyst nematode was significantly reduced where Caliente 99 was grown in conjunction with a standard nematicide treatment, says Mr Wade. “Vydate (oxamyl) was applied to the whole crop at 55kg/ha, but where the mustard had been planted root invasion was four times lower.”