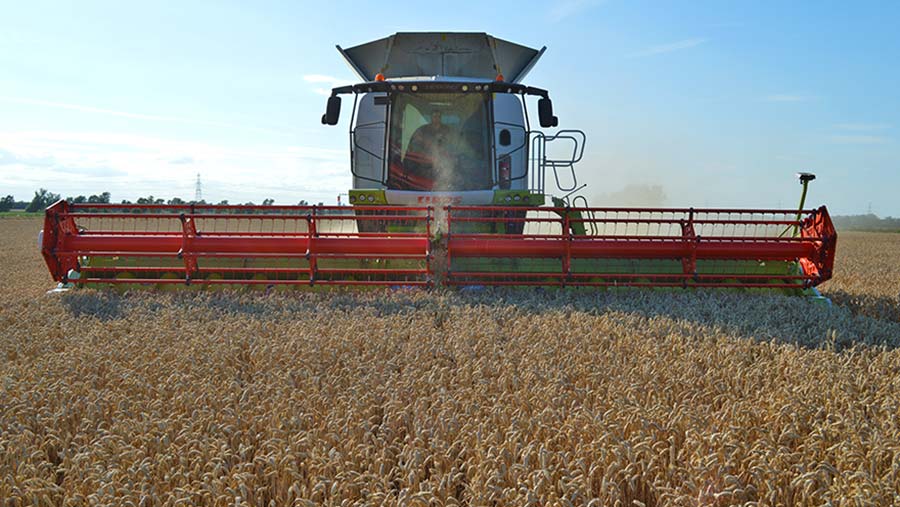 Early winter wheat yields in Cambridgeshire are looking good despite a difficult growing season and the harvest coming two weeks early, although combining is now being held up by rain.

George Palmer, farm manager at Northfield Farms, reports yields of the early maturing milling variety Gallant were 10.5-12t/ha on some of the lighter land which the group farms just south east of Ely.

The farming group has cut 80ha of 800ha of its winter wheat by the end of play Friday (21 July) but is now being held up by rain showers and combining may not get going again until later this week.

“The harvest is going okay, we are reasonably pleased and pleasantly surprised as we were expecting a lot worse after a difficult year,” Mr Palmer tells Farmers Weekly.

Watch the video below of winter wheat being combined at Northfield Farms.

The group started cutting winter wheat on 14 July with some early Gallant, and has Skyfall, Santiago and Reflection still to cut.

The Gallant is showing grain protein between 12-13.5% with most more than 13%, specific weight in the high 70s with top sample at 82kg/hl and is being delivered to co-operative Camgrain, where the group is a member.

The farming group farms nearly 2,000ha of land varying from sandy loams to fenland just north of Soham on the edge of the Cambridgeshire Fens.