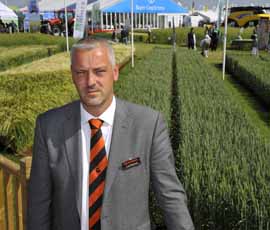 Growing wheat for a Warburtons loaf should be easier from harvest 2012 after the family baker announced at Cereals 2011 it was taking two new varieties onto its list of milling wheats that meet the required standard.

Crusoe and Edgar, both from Limagrain, were still only candidates on the HGCA Recommended List. But a partnership between the breeder, baker and Openfield, who exclusively handles the contract, had taken the varieties through baking and agronomy tests and gave Warburtons the confidence they would perform.

“We needed to fast-track a good bread-maker to replace Hereward and needed to offer choice, as relying on one or two varieties is risky,” said Warburton purchasing director Bob Beard. “In terms of baking performance, Crusoe and Edgar match Hereward and Solstice. What they offer the grower is better agronomic performance.”

Crusoe is a Cordiale cross, later maturing and with a hint of Shamrock in its lineage. But this shouldn’t put growers off, said Openfield national seeds manager Lee Bennett.

“It’s short and stiff, 3% higher yielding than Solstice, but has good yellow rust and septoria resistance. It’ll suit heavy soil sites, where lodging may be a concern, in the early slot. We’re excited about it because to get a Group 1 of this calibre to jump out of a UK programme is unusual.”

Edgar came from Germany, where it is already a recommended variety. It is taller, but “exceptionally stiff”, said Mr Bennett, and yielded 4% proud of Solstice. “It’ll suit the thinner soils of the Wolds and the Downs and has a high score for eyespot, so will do well as a second wheat. It also has an eight for fusarium.”

Both have withstood the drought well. Around 800-900t of Crusoe seed and 200t of Edgar will be available for autumn 2011 plantings at around £430/t. A lower spec 12.5% protein 225 Hagberg contract is available through Openfield, but this will attract the full milling premium.

Some existing Warburtons growers have already booked seed, including Buckinghamshire grower Ian Waller, who is planning to establish 50ha of Crusoe. “It looks greener, like Shamrock. But it’s the disease profile that interests me.

“The quality doesn’t look as good as Hereward, but then Hereward doesn’t keep it up, like Solstice does. But I wouldn’t want more than a third of my acreage in Solstice, as I don’t want a variety that will expose me to yellow rust. So Crusoe should fit well into the wheat portfolio.”