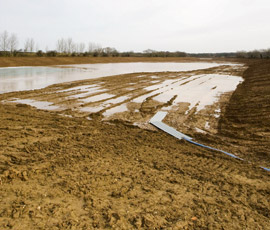 Farmers in central, eastern and southern counties are facing severe restrictions on irrigating crops this spring, according to the Environment Agency.

The average winter rainfall this year is lower than the months preceding the severe drought in 1976, which prompted a summer of damaged crops and water rationing.

Parts of the South-East, East Anglia and the East Midlands are already in drought and unless there is heavy rainfall over the next few weeks, water companies are expected to bring in restrictions.

Farmers are therefore facing restrictions on pumping water out of rivers to irrigate crops, and households face hosepipe bans.

Trevor Bishop, the Environment Agency’s head of water resources, said drought orders and permits could be issued as early as this spring in the worst affected areas.

His warning comes as the agency’s latest drought report for East Anglia said prospects for water availability for spray irrigation in the region were poor this summer.

Groundwater levels are “exceptionally low” in many rivers and aquifers in the region, which is an indicator for severe groundwater drought. Levels across many southern and eastern regions are “notably low”.

In addition, there is still an “exceptionally high soil moisture deficit across East Anglia from the continuing dry weather”.

Mark Bowyer, farm manager of the Holkham Farming Company in Norfolk, said his area had received only 40% of the average annual rainfall in the last 12 months.

River levels have fallen and, as a result, the Environment Agency has been limiting opportunities to abstract water over the winter.

“We have a total capacity to hold nearly 100m gallons of water and we have got less than 20m gallons,” he said on Tuesday (14 February).

“We have around six weeks left of pumping for winter fill, so if conditions recover, there’s still an opportunity to get enough supply.”

Met Office forecaster Charlie Powell said central and southern regions received around 48.9mm of rain in January, equivalent to 60% of their average rainfall for the month. East Anglia received 38.2mm of rain, 71% of its average.

“As we head towards March, the North-West will likely see some outbursts of rain, which could spread towards southern and eastern regions,” said Mr Powell.

“In terms of any really wet periods, there is nothing on the cards. But we could see rainfall pick up slightly above average by mid-March.”

Thames Water said 120% to 130% of the long-term average from February to April was needed to reduce the risk of drought to a low level.

A spokesman said: “Groundwater levels in parts of our region are lower than they were during the 1976 drought, following below average rainfall for 18 of the last 23 months. It’s now not a case of whether we’ll be having a drought this year, it’s a case of when and how bad.”

Meanwhile, DEFRA secretary Caroline Spelman has called a “drought summit” with water companies next week to discuss what measures need to be introduced.