The appalling weather has continued across the weekend with torrential rain leaving some areas flooded and other areas far too sodden for combines to move or ground to be worked.

One of the worst hit places has been the north east of England, but flooding has also affected Yorkshire, Shropshire, Herefordshire and Worcestershire. 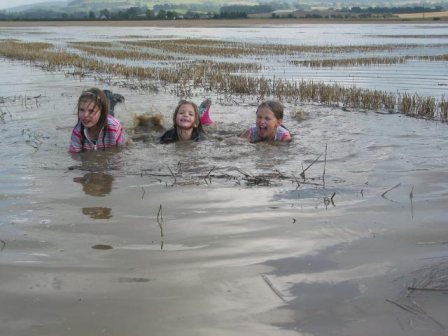 Farmers Weekly reader Steve Dawson sent in this picture taken on Sunday 7 September which shows his children Georgina, Hannah and Sarh inspecting land due to be drilled with winter OSR.  Location is believed to be North Yorkshire.

The Environment Agency has confirmed that there are currently 36 flood and 91 flood watch warnings in place.

Industry commentators are suggesting that there is still a third of the country’s cereals crop to be harvested and some farmers are describing it as the worst harvest for 20 years.

The torrential rain has left crops flattened and sprouting and many livestock farmers are hitting problems too. Animals are being moved to higher ground in areas prone to flooding and some producers are being forced to house their animals at night in a bid to keep their land from getting too poached up.

Have you got crops under water? Why not take a picture – or even a video – and send it to us with some information to caption it? Alternatively you can upload it directly to our picture gallery.

Or add your comments to our forum thread Is this the most frustrating harvest for 50 years?