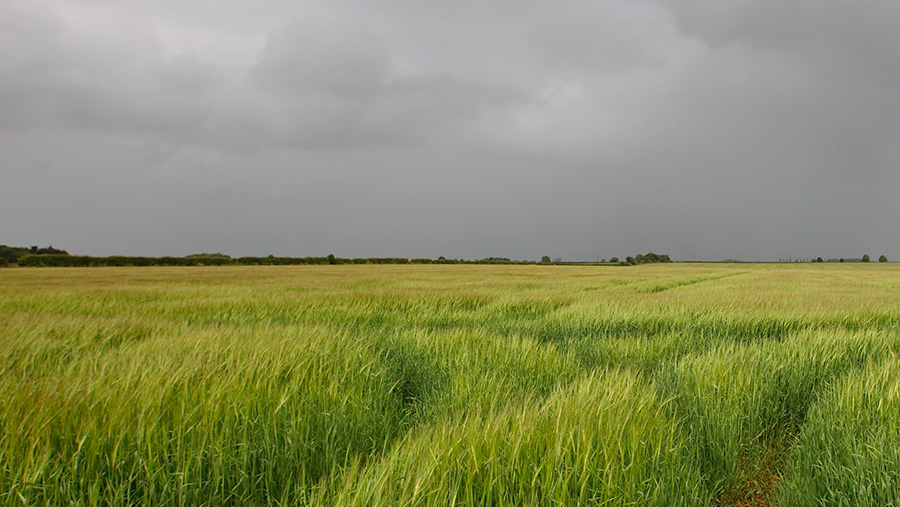 Extreme weather during June means crops and grass are suffering on an increasing number of farms.

Torrential rain fell during the month in south-east England and east Scotland – although other parts of the country missed out, according to preliminary statistics from the Met Office.

This meant that while most areas of the UK saw above average monthly rainfall, some areas had twice that amount and others had much less.

See also: A guide to fusarium diseases in wheat

Lodging is being reported in cereal crops, with high levels of disease adding to the challenge faced by growers as harvest approaches.

Away from north-east of England, much of England and Wales had a wet month with slow-moving, heavy downpours creating a patchwork effect.

Essex and Middlesex were close to recording their wettest June since records began in 1910 with 111.9mm and 112.5mm of rainfall respectively.

Northern, western and southern Scotland have had a rather dry month with about 70% of the average rainfall for these areas.

Most winter wheat has reached or has passed mid-flowering, with most of this crop area at moderate to high risk of fusarium infection.

Crops in East Anglia are particularly at risk of fusarium, according to the latest update from AHDB Cereals – although this will vary at field-level.

Dhan Bhandari, who manages grain quality research at AHDB, said it would be important that growers stored weathered crops separately to put them in the strongest marketing position.

“In particular, it is important that growers include actual rainfall figures from each field on the mycotoxin risk assessment due to the local nature of summer downpours.

Lodging is also a problem.

It was a similar picture in Lincolnshire, where Malc Parr said spring beans were taking a battering with winter barley and spring wheat going down in places.

Mean temperatures for the UK were above average by 1C, although this varied regionally from 2C above average in some western parts to around average along much of the east coast.

Grass growth has been affected too.

Livestock farmers facing reduced yields of first-cut grass silage after the cold spring are being advised to maximise the value of forthcoming cuts in order to avoid shortfalls.

Although grass growth improved due to better weather in the run up to harvest, this year’s first-cut silage yields still appear light, said Derek Nelson of Ecosyl.

In addition, sugar levels may be down in areas where sunlight levels were low. “Low-yielding first cuts will mean farmers have to rely more heavily on feeding later silage cuts this winter,” said Mr Nelson.