Oilseed rape might have a tremendous ability to compensate, but establishing crops successfully has a massive bearing on final yields, says Lee Bennett, an agronomist for seed breeder CPB Twyford.

“If you’ve made the right decisions with variety and seed rate, then crop potential is set at establishment.”

Before seed even gets near the field growers have an important decision to make, he says. “You’ve got to decide what to do with last year’s crop straw management is the beginning of everything.”

It means for non-inversion establishment techniques growers may have to consider autumn N ploughing normally mineralises enough nitrogen. “Sometimes you have to rebalance the soil by giving it a sniff of N 40kg/ha by the time the crop is at the two-leaf stage should be enough.”

Trash management will also have a bearing on how successful particular establishment techniques are likely to be. For example, sub-soiler seeding is useless where there are high residues, based on Mr Bennett’s experience testing different techniques at a Yorkshire trials site.

Establishment failed because it did not create a fresh wake of soil, so the seed fell on to the straw and could not germinate, he says. “It was a disaster. It showed trash management is crucial.”

Soil type can also limit where sub-soiling establishment will be effective, he believes. “You are restricted to soils where you can get a tine in.”

Sowing depth will also be uneven, which might cause problems when using pre-emergence herbicides, such as metazachlor, that require a specific depth of soil covering seeds. “Strictly speaking you are stretching labels by using it.”

But sub-soiling establishment does have some advantages, he says. “There is no loss of moisture and it is sown into a conducive environment, into a band of ground that is well fissured.”

Minimum pass, minimum tillage systems, such as Vaderstad Carrier, Simba Express or Opico disc roller, don’t really do anything to create a quality root zone. “They only really create minimum tilth, and if the variety can’t penetrate to the lower soil levels, they can be vulnerable to drought.” 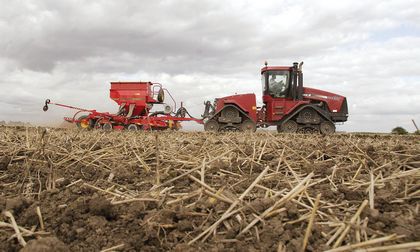 On the plus side these scratch-and-sow systems do minimise moisture loss, and are also useful in trashy conditions, he says.

They also fit well on shallow or stony soils where you can’t use a tine, he adds. “The other advantage is it doesn’t cost as much [as other systems that create more tilth].”

Subsequent agronomy can be a bit trickier, he notes. “There will be more management decisions and earlier. You might need two graminicides, for example, as you won’t have turned [grassweed] problems away.”

Growers using scratch-and-sow systems need to take more care over variety choice, he stresses. “You need a variety with extra vigour in its rooting ability, so it has to be a hybrid every time.”

In contrast, using a disc/tine combination, such as a Simba Solo or Vaderstad Topdown, to establish rape means almost any variety can be used. “It is also pretty universal regardless of soil type and, with the discs, you can choose more or less how vigorously you incorporate trash.”

The system is also flexible in the amount of soil that can be worked, and minimises moisture loss. “It means establishment is predictable.”

More machinery-intensive non-inversion methods, such as the one used by Mr Bennett on his Yorkshire trials site last year, end up costing more and not retaining moisture as effectively.

“It was sub-soiled before a tilth was created with a disc and press and then combi-drilled. It cost three times as much the one-pass system and took about three times as long. It did create a conducive environment in the root zone, but every time you went through you lost moisture.”

Growers can also lose too much moisture if they plough, he says. “Just remember 2003, and in a wet season it can create pans, as well as increasing erosion risk.”

Ploughing is also time-consuming and expensive, he points out. “It is only the first pass – you will need further cultivations to create the seed-bed.

“But it does mineralise a lot of nitrogen, gives a nice clean start for the crop, and you can drill to an accurate depth, so weed control is as effective as in any system.

“It is also easy street when it comes to variety choice. You can sow what you want.”