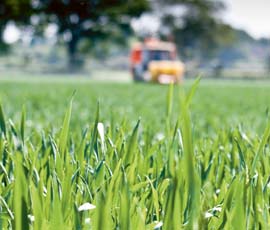 Wheat growers should not cut back T2 fungicide applications, despite pressure from septoria and yellow rust being lower than normal, say experts.

The prolonged period of dry weather appears to have reduced the disease threat in many areas, but the risk of infection is still too high to warrant dramatic rate reduction, says Mike Warner from Avocet Agronomy, Suffolk. “Even if crops look clean, there is no room for complacency, as infection could be latent.”

However, each crop needs to be judged on an individual basis and there could be a case for adjusting T2 product choice if there is no further rain, he adds. “In this case, the value of including one of the new SDHIs compared with a more conventional triazole plus strobilurin approach could be questioned.”

Crop damage has already occurred, with those on lighter ground particularly affected, he says. Some Robigus planted after sugar beet looks particularly poor, he says. “This will push crops through their growth stages and the T2 could be as much as 7-10 days earlier this year.”

Septoria pressure is particularly low in Devon, where growers usually struggle to keep on top of it with a “belt and braces” fungicide programme, says Neil Potts, agronomist for Matford Arable Systems. “The top four leaves are completely free of septoria, which is virtually unheard of for us.”

Some of his growers are considering scaling back their T2 spray, but he has advised them against making dramatic cuts. If weather does stay dry, the disease is unlikely to spread, but a small amount of rain could splash disease onto upper leaves, he says.

However, in areas where chlorothalonil is typically added to boost septoria control, he is happy for this to be removed. “I’m quite relaxed about dropping it, particularly where SDHI chemistry is being used, as it already has better control. Also, chlorothalonil is antagonistic to the SDHIs and it’s best not to mix them.”

Most wheat crops are holding up despite limited moisture, so it is still worth investing in a robust fungicide programme, he says. “Our fungicide spend is generally much higher than the rest of the country and we are still on the back foot. This year it will be more of an insurance policy.”

So far, direct moisture stress has not been sufficient to dent yield, but the lack of uptake of applied nitrogen could have already taken its toll, he says.

In Shropshire, about 25mm rain at the beginning of the week had freshened crops up considerably, said Agrovista agronomist Andrew Wade. “Yield potential had been knocked in some crops, but there has been a resurgence of green leaf.”

Septoria pressure was still low, but mildew was in the base of many wheat crops and yellow rust was also a threat. “There was a lot of yellow rust around at the end of March and although it dried up in April, the threat is still there.”

He’s sticking with a robust T2 spray, but adjusting the recommendation on a field-by-field basis. “It depends how the crop looks and what the disease pressures are. I’ve got some crops with a 10t/ha plus yield potential and some that will only achieve 7.5t/ha. This year I am juggling more fungicide active ingredients than ever.”

Keep track of septoria plus yellow and brown rust in your area with our Disease Watch service.