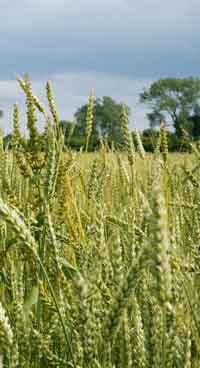 Virtually all farmers now grow wheat as a mono-culture. One can cover big blocks of land, and feed is renewed each year.

While this gives the grower a uniform stand and even performance, it also means the crop is more vulnerable to pressures such as drought or flooding as well as disease. With climate change an increasing concern for growers, the ability to produce a crop that will endure extremes such as seasonal droughts, heatwaves and torrential rain is bound to be of interest.

In a joint DEFRA-funded project between The Arable Group and the Organic Research Centre, scientists investigated whether increased genetic diversity within the crop would boost performance.

To do this, three mixed wheat populations were created from 20 parent varieties, including both modern and older breeds. A quality milling population was created using 12 of the higher protein varieties such as Hereward, and a high-yielding feed population was produced from nine of the parents. A further “all-rounder” was produced using all 20 parents.

These populations should not be confused with variety mixtures, says the Organic Research Centre’s Thomas Döring. A mixture consists of several different varieties, while in a population varieties are crossed to produce a crop in which almost every plant is genetically different, he says. “They are much more diverse than variety mixtures.”

These populations were grown alongside standard monocultures and the offspring were re-sown in the same field year after year. In the resulting crop virtually every wheat plant was genetically unique, says Dr Döring. “By comparing these populations with their parents, we could test whether genetic diversity had any affect on yield.”

The results were consistent with expectations and showed that the populations exhibited greater yield stability than the monocultures. “This strongly suggests that sowing a crop where the individual plants display different genotypes is a way to stabilise yields.”

The fact that populations out-yielded the average of their respective parents was particularly interesting, he adds. “One reason for this could be that varying plants heights allow the crop to absorb more light.”

Evidence from previous experiments suggests that increasing genetic diversity within the field will also give better disease resistance.

“We know from experiments with variety mixtures that genetic variability reduced disease impact on the crop. For example, a disease that affects one genotype in particular will have less impact where there are many genotypes in the same field.”

His colleague, Martin Wolfe, says that the findings could have important knock-on effects for farmers and seed breeders.

“A key feature of these wheat populations is their ability to change over time. If some of the harvested crop is saved for seed, the crops that have fared well will contribute more to the following season’s seed. By sowing and re-sowing the population year after year, a farmer will slowly build a wheat crop that is more adapted to local farm conditions such as weather, altitude, aspect and soil type.

“It is a simple form of natural selection; every farmer could breed their own modern race,” he adds.

To test the adaptability of these populations they were subjected to major environmental changes. In a Hungarian experiment the harsh winter almost killed the whole population off, but replanting the few survivors saw the offspring emerge as a top-yielding line.

Populations can also be moulded by adding new varieties, Dr Döring adds. “Growers can introduce the latest wheat varieties to the population and update it.”

TAG’s Ron Stobart says the concept could have real value for both organic and conventional growers. “Two dozen farmers in the UK are now growing populations on their farms, and we look forward to seeing how quickly the populations will adapt to the respective farm conditions.”