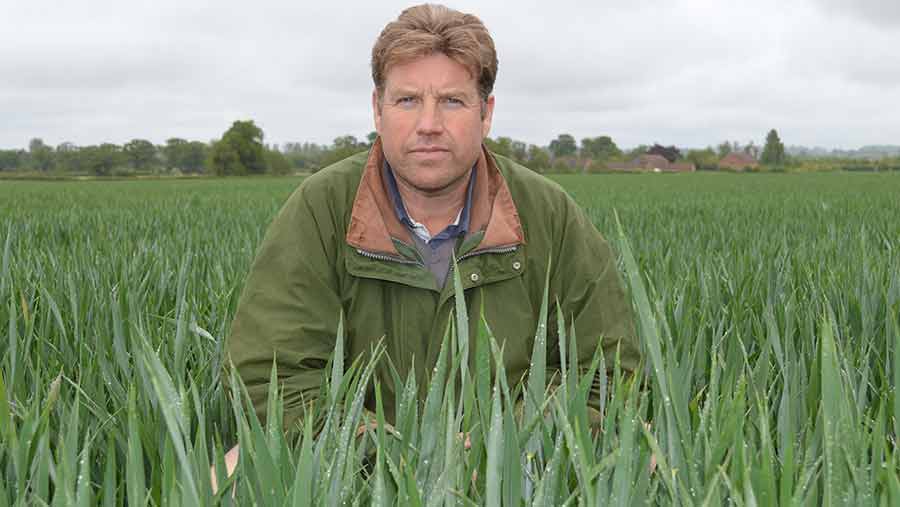 Flag-leaf wheat fungicides were set to be applied today (Thursday) on Tony Pointer’s farm in north Norfolk to keep his seed crops free of disease.

He is growing an equal area of two winter wheat varieties Siskin and Costello across 60ha for seed multiplication on his light sandy loam land and flag-leaf, or T2, sprays are now due.

“Both varieties look very clean of disease, but for seed crops we need to make sure we keep any disease out of the crop,” Mr Pointer tells Farmers Weekly.

This is the second year he has grown the two varieties and last summer Siskin yielded 10.3t/ha and Costelllo 10.5t/ha against a 10-year farm average yield of 9.5t/ha.

With wheat flag leaves fully emerged, he is applying a three-way fungicide mix of the SDHI penthiopyrad, azole epoxiconazole and the protectant multi-site active chlorothalonil.

The 60ha of wheat seed crop are being grown on Mr Pointer’s 203ha Manor Farm, Sculthorpe, one mile north-west of Fakenham along with oilseed rape, forage maize, sugar beet and potatoes.

Further west, T2 applications were progressing well in South Lincolnshire with about 75% of work now complete. Farmacy agronomist Alex Richardson, who covers the southern part of the county, says levels of septoria in newer, more resistant varieties such as Siskin and Skyfall were low.

“Reflection winter wheat crops, which received a robust T1 with an SDHI, are now greening up again after getting good curative activity for yellow rust,” he adds.