A detailed insight into factors affecting the market and a new tool to manage volatility were presented to growers at a recent conference organised by grain merchant Gleadell and crop production specialist Hutchinsons.

After gaining ground since the start of the year, oilseed rape prices have been slipping in recent weeks. How long this will continue and to what extent is always hard to predict, but a closer look at the key market drivers helps throw some light on how events might unfold.

“There are some factors we cannot predict for the new marketing year, one of which is the weather in the northern hemisphere,” said Oliver Balkhausen, deputy head of economics at global trader Toepfer. “The next few weeks will be a critical time. However, there are other factors we can take as a given,” he told farmers attending the conference.

The area of soya beans, a direct competitor to oilseed rape, was set to rise sharply during 2014, Dr Balkhausen predicted. This was mainly due to the relatively high price of soya beans compared with corn; the price ratio between the two commodities had recently trended above the long-term average of 2.45:1.

Trade figures suggested the three major producers – Brazil, Argentina and the USA – would grow 81.3m ha of soya beans in 2014, up from 77.3m ha the year before, mostly at the expense of corn.

Production figures from the first two countries were bearing that out. Brazil was harvesting a record soya bean crop of 86-88m tonnes, up to 8m tonnes more than 2013, and Argentina was likely to cut at least 54m tonnes, an increase of 5m tonnes. Both countries had starting exporting, he added.

A similar pattern was expected for rapeseed, said Dr Balkhausen. “Crops have survived the winter in very good shape across the EU and Ukraine, where we sometimes see winter kill rates of 40-50%. That is not so this year – we have seen very few cases.”

EU output was set to hit 21.7m tonnes in 2014-15 (see graph below), according to USDA/Toepfer figures, 800,000t more than 2013-14. Better planting conditions in the UK and France would probably favour higher production, outweighing a slight fall in Germany, Poland and Ukraine. Ukraine was in line to harvest at least 2m tonnes, most of which (1.6m tonnes) was destined for the EU. Additional Australian exports could push EU supply close to 24m tonnes, he believed. 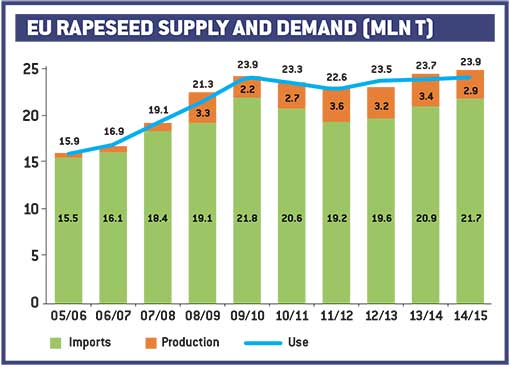 Canada would also resume large-scale canola exports to Asia at any time, he predicted. Railroad companies had been favouring high-value, mainly energy-related products over agricultural commodities, which had stalled canola (OSR) exports. However, this was likely to change following the threat of financial penalties, said Dr Balkhausen. “Canadian exports could increase dramatically at a time when we expect to see another good year for EU and Ukrainian production.”

In addition, demand for rapeseed from the biodiesel market, which had been a key driver of markets until last year (see panel left), had levelled off, Dr Balkhausen explained.

This trend had been reflected globally and was a key reason for the increase in vegetable oil stocks. USDA figures showed global ending stocks had been relatively stable between the middle of the last decade and 2010-11 but has since increased heavily. Rape oil stocks had almost tripled to 3.7m tonnes during the past three years.

“Given the good production prospects and a stable-at-best outlook for rapeseed oil, I fear for 2014-15 we will have more rapeseed than we need in the EU,” said Dr Balkhausen. “However, as with all agricultural markets, the weather remains a critical factor, and a big unknown.”

A key reason for this was competition from used cooking oil, which now accounts for 12% of the EU biodiesel market, or 1.4m tonnes a year. “The important thing is that used cooking oil can be counted twice against biodiesel quotas in individual countries, so it has substituted rapeseed to a large extent,” said Dr Balkhausen.

The introduction of high anti-dumping tariffs last year by the EU on cheap soya bean methyl ester biofuel from Argentina, Indonesia and Malaysia had not triggered the hoped-for boost in demand for rapeseed, he added. Although SME imports fell by two-thirds, in the end they were virtually all replaced by palm oil, another key feedstock.

As a result, rape oil only accounted for about 45% of biodiesel production in the EU. Hydrotreated vegetable oils – which could be made from any feedstock, but were currently mostly derived from palm oil – were also gaining ground. Importantly, the inclusion rate in mineral diesel fuel was about four times that of conventional biodiesel, said Dr Balkhausen.