The Chapman family, who built a sustainable farming business using innovation and information, say benchmarking is an essential component.

“There’s not a business on the face of the planet that wouldn’t benefit from benchmarking,” says Peter Chapman, who farms 1,050 acres of predominantly arable land in north Aberdeenshire.

He shares information with a dozen like-minded farmers he met eight years ago through the AHDB’s Arable Business Group but who now meet to compare figures using the levy body’s Farmbench tool.

By analysing variable and fixed costs, each participant is able to see where they stand in comparison to their peers and can use the information to drive businesses improvement.

“You’re often in a bubble when you’re farming so there’s real value in getting out there and comparing performance with other farmers in the area who are in a similar cropping pattern on similar soils,” Peter explains.

“It’s an opportunity to look over the fence and see what others do differently and try to learn from them.” 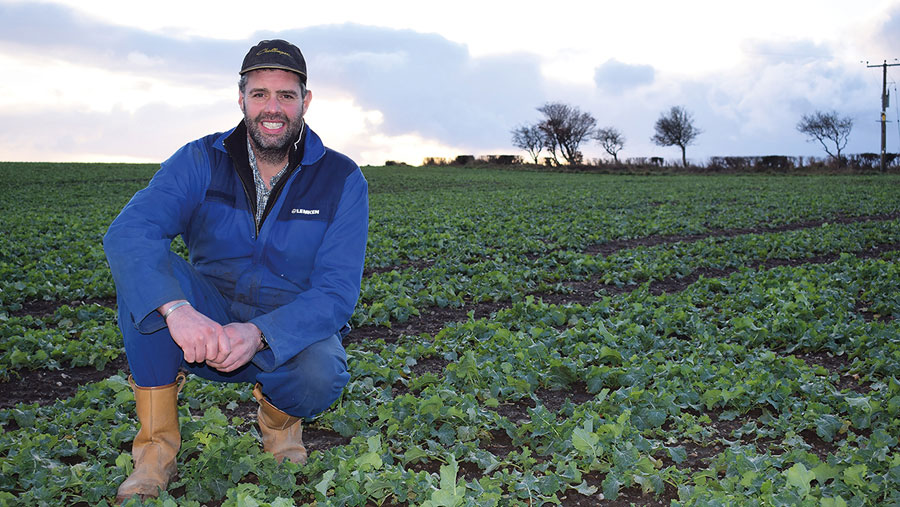 Peter farms with his wife, Grace, at South Redbog Farm near Strichen.

Together with the help of a self-employed farm worker, Andrew, they provide the labour required to cover 850 acres of cropping land and 65 suckler cows plus calves which graze the farm’s more challenging permanent pasture.

Occasionally their three teenage daughters are “roped in” when required, but the farm prefers to use big machinery, technology and information sharing to increase efficiency wherever possible.

Looking down the road is something Peter clearly prioritises. “We’re always open to new ideas, that’s for sure,” he says.

This mantra manifests itself in a number of ways, the most obvious being the machinery fleet which is loaded with technology and designed to handle much bigger units than the Chapman’s.

But it is the presence of four wind turbines – which Peter describes as “the best business decision the farm has ever made” – that says more about the mindset at South Redbog.

“Much of the family’s farming history is built on poultry, both in laying hens and broilers,” Peter said.

“We have been in pigs and dairy too. In fact the only thing we’ve not been involved in over the years is sheep and fresh produce.

“We go into something when there is profit to be made and we are not scared to come out when it diminishes.

“My view is that it’s the early adopters who get the cream. That’s why the wind turbines have been so good for us.”

The farm was mortgaged to fund the £4.5m diversification into wind energy – the first two Enercon turbines went up in 2008 to lock in the Renewables Obligation Certificates with two more following in 2013 on Feed-in Tariffs.

The Chapmans now have a combined capacity of 3.2mW which provides the bulk of the income for the farm, providing them with confidence to invest in agriculture.

“Our soils are sandy clay loam so getting rid of water is our biggest problem with 36 to 40 inches of rain per year,” Peter said.

“Every acre gets mucked annually with 3,000t of bought-in compost plus manure from our cattle and sometimes some chicken muck too.

“Because of the turbines we are able to run a better fleet of machinery and get across the ground quicker.

“Our P&K indices are excellent and organic matter is between 7% and 9% across the whole acreage.

“We have pretty fertile soil and I like to think we’ve created that.”

The flip side to having the technology to be agile and hit spray timings with precision is a hefty machinery investment.

Peter admits that his friends enjoy pointing out his fixed costs at Farmbench meetings.

“I know I spend too much money on machinery but that’s partly down to the fact that I’m the one sitting on the machines through the spring and at harvest, and partly because I’m a little bit addicted!

“On a serious note, we have the diversified income so having the machinery is something we are able to do. I know for a fact that if I was running an arable-only business I wouldn’t be able to the run the fleet I have.

“If things get tougher for agriculture in the future – and the indication is that they will – then I, like everyone, will have to look at what I’m spending and whether it is as efficient as it can be.

“The important thing is that, through benchmarking, I know where my expenditure is and that depreciation is a huge factor in my business.”

Learning from each other

Within the diverse group, Peter is able to share his figures with other farmers who operate at a range of scales.

“We have got farmers who have 300 acres and one who contract farms 4,000 acres with one combine,” he said.

“Farmbench is critical because we spend about two hours going through the figures to understand where the differences are between us and what the trends are from one operation to the next.

“You get your group average so you can see whether your figures are near the top or the bottom but the most useful aspect for me is the dialogue that follows the figures.

“The farmer-to-farmer discussion is where you will find out how to make the tweaks that will improve your business.”

The group Peter attends is well established but is keen to attract new faces to bring fresh insight.

He thinks being open with business figures isn’t always something farmers are particularly comfortable with.

But he is a huge advocate of benchmarking and urged those who don’t yet do it to consider trying Farmbench.

He said: “At the end of the year you might have to spend some time in the office but that’s the bit I enjoy the most.

“Even though I’m into technology I still like to write everything down in a book.

“Because you are so busy growing the crop it’s not until the end of the year you really get the chance to analyse how things have gone.

“Yes there is some work involved but once you’ve done it once it gets easier and there are always people at AHDB etc who are there to help you if need it.”