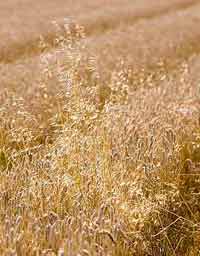 Wild oat control in barley is more than twice as effective if water volumes are halved from 200 litres/ha to 100 litres/ha, research shows.

However, trials with Axial (pinoxaden) show adjuvant rates must be increased at lower water volumes or the product will lose some of its efficacy, says Syngenta application specialist Ben Magri.

“Adigor is a key constituent of wild oat control when using Axial. It aids the uptake of the product and is important to maintaining good control, so its rate must be increased to 1% at water volumes under 200 litres/ha to maintain an adequate concentration.”

The trial was carried out on Saffron winter barley at Cambridgeshire grower Tim Scott’s farm in Barton. Similar results were found by replicating the trial in winter wheat, Mr Magri says.

Research has shown that wild oats planted at 5/sq m gives a 5% yield reduction, Mr Magri notes. “Per plant, wild oats are the most competitive annual grassweed in cereals.”

At current barley grain prices of around £155/t, he calculates that applying Axial at a reduced water volume can give growers an extra £80/ha.

It is believed that an increased concentration of product leads to a greater kill of wild oats – a trait Syngenta has observed when trialling other products in its herbicide range.

The trial also analysed how changing the forward speed and boom height of the sprayer during application affected weed control.

Increasing the boom height from 0.5m to 1m and applying the same water volume (100-litres/ha) resulted in an increase in wild oat plants of 2-3/sq m.

Increasing the forward speed from 12kph to 16kph with the boom height set at 1m resulted in a further 5-6/sq m.

“Therefore, we would strongly recommend that the sprayer operator travels at 12kph and keeps the boom as near to 50cm above the top of the crop as they can.”

Reducing the water volume can also help with timeliness of applications and reduce time spent in the field spraying.

“If you are filling your sprayer half as many times you can get round your land a lot quicker,” Mr Magri says.

“Second, after choosing your product it’s important to hit the spray timings.

“If you get catchy conditions, reducing water volumes to 100-litre/ha means growers can get round fields a lot quicker and make sure they get the product on at the correct growth stages. This also gives increased control.”

Axial must be applied before flag leaf extending stage (GS41). Timing of applications can vary from one season to the next, but growers should make sure they have a full spring flush of oats and then apply Axial as soon as possible, Mr Magri says.

“Grassweeds are easier to kill when they are quite small before they have got lots of tillers while the crop is smaller as well,” he adds.

“With a taller crop, it’s a battle to penetrate the bottom where wild oats are tillering.”

To apply Axial, Syngenta recommends using its own Amistar Nozzle, a low drift, lean back nozzle, or secondly, any standard flat fan nozzle.