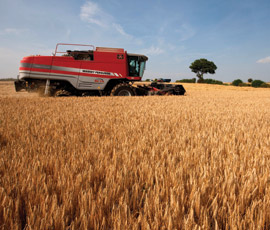 Winter barleys are offering some promising yields both in the field and now in some of the early KWS trial results, with some varieties topping 12t/ha.

Bold grained two-rows have led the way, producing average yields on a par with some of the leading hybrid varieties.

At the trial sites in the Eastern counties, variety KWS B104 achieved 12.3t/ha while at the other trials Cassia and Volume managed 11.6t/ha.

Glacier has also produced high yields in the trials – its highest being 11.9t/ha in the East.

While mean specific weights for varieties are surprisingly down on last year, two rows such as Cassia and Glacier produced good samples in the range of 63-67kg/hl compared with Volume at 59-60kg/hl.

According to KWS product development manager John Miles, the trials highlight the better quality grain potential of two-row barleys, even when hybrids are sown at the lower seed rates now being advocated.

“It appears that, once again, those varieties with a better inherent specific weight have done better in another difficult season,” concludes Mr Miles.

Meanwhile, Mr Miles suggests that while more data is required to confirm these trends, bold-grained two-rows continue to look like a great option in the second cereal slot and help to spread the workload.

“Their earliness to harvest, even in a late season such as this, gives growers the best chance to create a good seed-bed and an early entry for their rape crops,” he says.

Keep up to date with how the winter barley harvest is progressing this year.