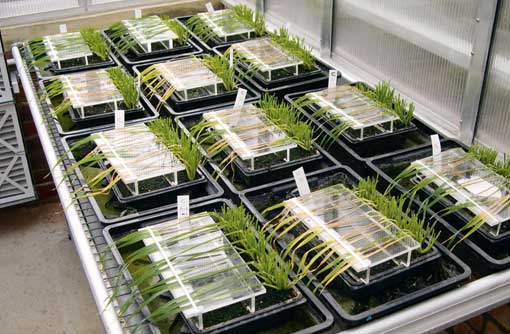 Resistance development was dramatic with strobilurins, while with the azoles, gradual and partial for some fungal pathogens. So how long will it be before the activity of the SDHI fungicides is broken down?

That is one of the key questions being answered in an ongoing HGCA-funded LINK project to prolong the usefulness of the SDHIs by understanding the mechanisms of fungicide resistance.

The focus is on the most important wheat disease that the new generation of active ingredients successfully controls – septoria.

Bart Fraaije, of Rothamsted Research, believes the SDHIs will be neither like the strobilurins nor azoles, but will fall somewhere between the two.

“Like strobilurins, the SDHIs are single site-specific, meaning one mutation in the target pathogen’s DNA can allow the pathogen to survive better after spraying, by changing the protein at the fungicide binding site.

“But there may be other mechanisms working alongside this to reduce sensitivity of the pathogen to the fungicide. We need to know how pathogens develop fungicide resistance to make more accurate risk assessments and to develop molecular tools to detect resistance development early in the field.”

To do this, Dr Fraaije uses UV light to create SDHI resistant mutants of septoria strains in a controlled environment in the lab, then selects on fungicide amended agar plates.

These experiments show that a range of mutations in three of the four sub-units of the target protein (succinate dehydrogenase) can confer different levels of resistance to SDHIs. Interestingly, when mutants were tested for SDHI cross sensitivity, differences in efficacy were observed for different SDHIs.

Some mutations found for septoria have also been found in field strains of other pathogens such as botrytis on strawberry and alternaria on pistachio nuts.

However, tests on field isolates last season and this year indicate resistance has not developed in UK septoria field populations, even to boscalid which has been around for seven years.

“It may be that there are fitness costs associated with mutations, and using SDHIs in fungicide mixtures is preventing resistance development.

In the absence of SDHI resistance, we are currently developing molecular tools to detect some of the anticipated mutations at low frequencies and field trials are investigating if SDHIs can slow down resistance development to azoles.”

The industry project partners are monitoring any sensitivity shifts to SDHIs in other cereal pathogens such as net blotch, rhynchosporium and ramularia in barley.

Meanwhile, the Fungicide Resistance Action Committee (FRAC) recommends using a maximum of two SDHIs per season, and always in a mixture with an azole or other fungicide with a different mode of action. A robust preventative fungicide such as chlorothalonil – with multi-site protectant activity – can be a useful addition in programmes for septoria.

“We know that well-timed SDHI sprays offer good protection against the key disease in wheat. We just need to ensure this continues, and that new chemicals from this group, will not be under threat.”