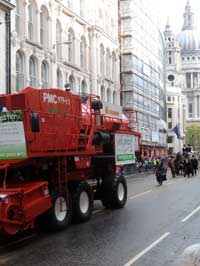 A pea harvester took to the streets of London over the weekend, as part of the historic Lord Mayor’s Show.

The machine was representing the frozen pea industry and The Worshipful Company of Farmers in this event watched by millions of people – either lining the streets or watching it on the TV.

The harvester, which was part of the 6000-strong, three-mile procession, was sponsored by the Yes Peas! campaign, coordinated by the Louth-based Processed Vegetable Growers Association (PVGA).

“It was just incredible how well we were received – we were proud to be able to drive the harvester around the City of London and even executed a perfect three-point turn in the shadow of St Pauls.” says Stephen Francis of Fen Peas, who loaned the harvester for the Show.

The machine was sporting key messages of the campaign, such as how frozen peas are fresher than fresh, that the best peas are frozen within 150 minutes of being picked, as well as explaining the work of the harvester.

Walking in front of the machine were the master of the Worshipful Company of Farmers, Jeremy Courtney; the senior warden, Follett Balch; the junior warden, Peter Faulkner and liveryman and member of court, Lindsay Hargreaves.

The huge machine had set off from PMC Harvesters in Fakenham on Thursday, making its way the 100-plus miles to the capital. The children of All Saints Church of England Primary School had waved it off shouting “Yes Peas!”