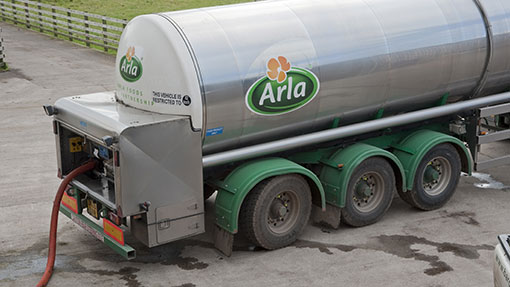 Arla has dropped a 3p/litre price cut bombshell on some of its direct suppliers, taking their price down to 24.8p/litre from 1 December.

This affects between 40 and 50 producers whose contracts are not aligned to a retailer and who supply 40m litres of milk to the co-op.

These producers represent about 1% of Arla’s milk pool. Their milk was now surplus to retail demand and was therefore only attracting commodity values, hence the price cut, said an Arla spokesperson.

Against expectations, Arla recently announced that there would be no price change for November for its 13,500 full co-op members across Europe, 3,000 of whom are UK farmers. They are currently getting 28.47p/litre and will continue to receive this throughout November.

However, the 3p/litre direct supply price drop will cause speculation about the implications for the December price for the whole membership.

“The direct milk price is totally decoupled in terms of the pricing mechanism from our owners’ milk,” said the spokesperson. “Our owners’ price reflects the performance of the company, we held our owners’ price for November and the December price will be decided towards the end of the month (November).”

The direct supply contract was launched in February 2013 as the co-op sought to increase its milk supply by 500m litres a year in the run up to the opening of its new dairy in Buckinghamshire – the world’s largest liquid milk plant.

The co-op has further direct supplier contracts in addition to those affected by the December price cut but producers on these are aligned to Tesco and Sainbury’s, with their prices calculated on a different mechanism.

Arla also recently launched a branded campaign to encourage consumers to support its dairy farmers by choosing its brands.

Muller Wiseman will also make no change to its non-aligned 27.1p/litre price for December. About half of its 1,200 farmer suppliers will receive this price, with the remainder on aligned contracts with alternative pricing mechanisms.