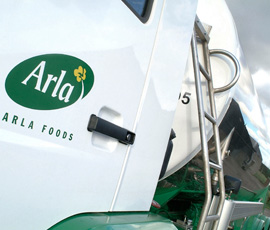 Arla Foods UK is the latest dairy processor to offer a volume incentive to producers in a bid to secure more milk.

The company has introduced a growth incentive for all Arla Foods Milk Partnership (AFMP) producers and direct suppliers to its Arla Milk Link Direct and Arla Foods Direct pools, not already on a retailer-aligned pricing model.

Between 1 July and 31 December 2013, the processor will pay a bonus of 5p/litre on additional production above 2012 monthly volumes. The bonus will be paid on a monthly basis.

Arla said its growth incentive would ensure its farmer suppliers would benefit from the company’s growing milk demand, and described the scheme as a more sustainable way of sourcing milk, as opposed to purchasing it from external suppliers.

Last week the company confirmed its new £150m dairy near Aylesbury, Buckinghamshire, was on schedule to be fully operational in early autumn this year. The dairy has a capacity of 1bn litres, although this will be introduced in a phased approach. Recruitment of producers – originally a target of 500 new producers over a five-year period was set in February 2012 – continues.

In addition, the company will increase the price it pays AFMP producers and both groups of its direct suppliers from 1 June.

“As a farmer-owned co-operative, we are fully aware of the difficulties all our farmers have faced with increasing feed costs, coupled with lower production volumes. We have been able to make this announcement as a result of support from our key customers,” said Ash Amirahmadi, vice-president with responsibility for UK milk and member services.

Last week the company announced an increase to Arla Milk Link members of 1.06p/litre to 30.21p/litre from 29 April.

The June Arla Milk Link price will be announced towards the end of May.