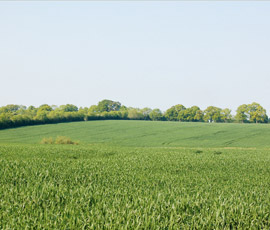 Another 500 acres or so of bare land will be put up for sale this month, taking advantage of high land prices.

In Shropshire, a rare opportunity to acquire a substantial acreage of prime arable land south-west of Shrewsbury has arisen with the sale of 117 acres at Plealey. The productive land is in good-sized enclosures and is available as a whole or in up to six lots, each with good access from the road. The guide price is £10,000/acre.

The land, which lies outside the nitrate vulnerable zone, has been in an arable rotation and the well-drained Ellerbeck and Clifton soils are suitable for arable and grassland.

“We are delighted to be offering this land for sale,” said Chris Jones, Berrys partner in charge of agency at Shrewsbury. “Prime arable land such as this rarely comes to the market, particularly in this area, and we are expecting a great deal of interest from local farmers as well as from potential buyers further afield.” (Berrys 01743 271 697)

Two blocks of arable and pasture land are looking for buyers in north Wiltshire. About 107 acres of Grade 3 land, well managed and farmed, includes some 77 acres in grass and small areas of woodland managed for conservation. The guide price is £630,000 – just short of £6,000/acre.

The second parcel, of about 58 acres on the Wilts/Berks border, near Marlborough, is billed as an excellent block of gently undulating Grade 2/3 land, split into four fields in the North Wessex Downs Area of Outstanding Natural Beauty. The land falls into a higher-level stewardship target area. Guide price is £540,000 – about £9,300/acre. (Woolley & Wallis 01672 515 252)

Another 51 acres of bare Cotswold arable land are for sale at Kingscote, near Tetbury, Glos, with a guide price of £375,000 (about £7,350/acre). Most is in an arable rotation and block-cropped, currently growing winter wheat. It is being farmed in conjunction with nearby 321-acre Nupend Farm, which is also for sale. (Strutt & Parker 01285 653 101)

Few, if any, sales are forced, agents say. But Jason Beedell, Smiths Gore’s head of research, believes the market could be splitting into three parts. Primary quality land will continue to rise in value and secondary land is also likely to find buyers relatively easily. “When you get down to the ‘tertiary’ level, I think we could see some sticking, with relatively little interest, especially from other farmers,” said Dr Beedell.