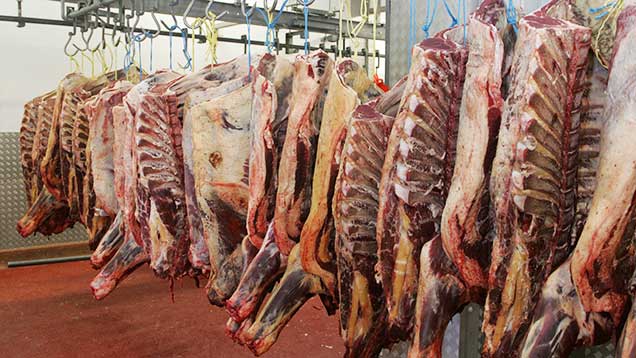 The farmgate to retail beef price gap has widened further through the first few months of this year.

The latest figures from Eblex show that in May the farmer’s share slipped to 47% of the final retail price – a five-point fall compared with January 2015.

“Given the trend in farmgate and retail prices, for the second consecutive year the declining producer share has bucked the historic seasonal trend of increasing in the early months of the year,” said Eblex in its weekly cattle and sheep report.

“This would normally be apparent particularly in the run up to Easter, when farmgate prices would have been supported.”

See also: Christmas dinner – how much does the farmer get?

Tightening supplies in the past couple of weeks appear to have steadied the finished cattle price, bringing hope for a rise in producer share.

However, this depends not only on finished beef supply but on the pricing policies of retailers and the economic background of consumer wages and inflation.

On the supply side, while the second half of this year should bring lower UK and Irish beef supplies, the benefit of this could be tempered by the strength of sterling against the euro, bringing price-competitive imports.

The lamb producers’ share of the retail lamb price also fell in May, down by four points on the month to 50%.

This is eight points lower than the share at the same time last year. High supplies brought a sharp fall in farmgate prices and this was the main reason for the drop in producer share.