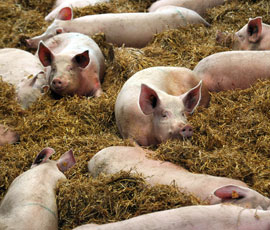 Although the Deadweight Adjusted Pig Price moved up by 1.44p/kg in the week to 4 June to stand at its highest point this year of 150.8p, weekly contract or shout prices issued by the four main UK abattoirs failed to follow suit.

Spot buyers also took their cue from the weekly announced prices and remained at generally similar levels with spot bacon quoted in the 156-160p/kg range according to region and specification.

Sellers of lighter weight pigs were rewarded with premiums of 4-6p/kg above bacon prices and are also benefiting from lower feed costs by selling pigs at lighter weights.

Although LIFFE wheat futures prices eased by between £2 to £4/t on Friday, spot quotes for feed wheat are still in the £184-188/t range.

Weaner prices continue to lag well below cost of production, reflecting the effect that soaring feed costs are having on finishers’ margins.

The latest AHDB 30kg ex-farm weaner average price remains pegged at £45.70 a head, which is an estimated £5 to £7 below cost of production, and 7kg weaners have been trading at around the £30 a head mark.

Demand for cull sows, most of which are exported to Europe, has remained at similar levels with exporters prepared to pay in the region of 100p/kg deadweight.

The euro closed the week marginally easier at 88.4p compared with marginally above 89p seven days ago. Any further falls from this level would be bad news for UK pig producers at a time when low cost imported pigmeat is continuing to undercut the domestic product.