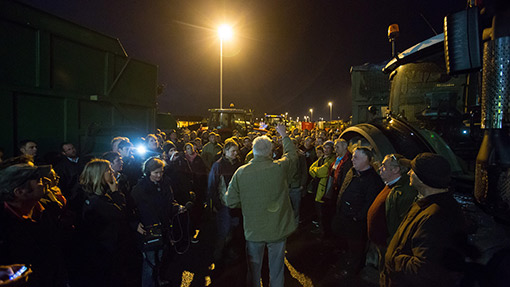 The NFU has accused farm lobby group Farmers for Action of “idiotic” behaviour for blockading a milk distribution depot in a protest against falling milk prices.


Speaking at the NFU Council meeting on Tuesday (14 October), NFU dairy board chairman Rob Harrison said the union did not support FFA’s decision.


“We still do not believe that blockading dairies is the way forward,” Mr Harrison told delegates.


“And certainly when we blockade a transport depot centre, which is going to stop farmers’ milk being delivered, that seems a little bit idiotic.”


Mr Harrison said the situation now was different to 2012 when UK farmgate milk prices were 2p/litre below the rest of Europe.


“What culminated in 2012 with bad weather, rising input prices and falling prices, was we came together as an industry,” he explained.


“What was successful was we shamed retailers into putting more money in the supply chain… then after that, the market situation worked.


“Today, we are in a very different situation. The global market has driven the price from 34-35p/litre back down to 27p/litre.”


“We are competitive to countries similar to ourselves,” he added. “We currently are not in a different situation to anyone else in the world.”


Mr Harrison said the dairy industry had to move forward and not worry about the past.


He said the NFU would be lobbying the UK government to increase exports of all dairy products, including yoghurt, milk powder and cheese – and push for more accurate labelling of products.


To highlight his point, he showed the audience a packet of Pilgrim’s Choice cheese and read off the label: “Cheese produced with milk from the UK, Ireland, Australia and New Zealand.”


Mr Harrison said finding new mechanisms to cope with price volatility was a priority as well as working with retailers to expose good and bad practices.


“We have been talking to Muller to look at new ways of balancing seasonality,” he said.


He said the NFU needed to work with banks to ensure that dairy farmers who had taken out loans over the past 12 months were being fairly treated.


Looking ahead, Mr Harrison revealed that the NFU was working on the launch of a “Back British Farming” type campaign next month. And next summer, the union was considering a week-long campaign focusing on the promotion of the UK dairy industry.


“Ultimately, there is a bright future for dairy farming,” he said. “The Tetrapak report last week predicted an increased demand for dairy over the next decade.


“We have still got to get through this difficult period.”


“That is not doing the industry any favour whatsoever. When Iceland dropped the price down to 89p, somebody along the supply chain is going to suffer.


“Minette [Batters] used the word ‘criminal’, and I would agree.”