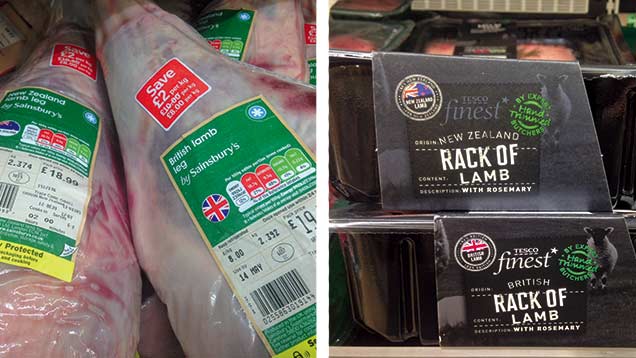 Home-produced lamb is fighting to attract consumers alongside lamb in very similar packaging.

Healthy supplies of British lamb have been losing the fight for supermarket shelf space against New Zealand imports.

A Farmers Weekly survey of the big four retailers found just 51% of shelf-facings of fresh, own-label lamb were British over the May bank holiday.

Asda was the worst performer, with just 31% of British facings, and the rest from New Zealand or Australia.

Retailers typically stock southern hemisphere lamb in the run-up to the new season switchover in late May. This is particularly true for cuts such as legs.

But this spring has been tougher for British producers, with a drought-induced early season for New Zealand lamb and a bigger carryover of hoggs putting pressure on the trade.

NFU livestock board chairman Charles Sercombe said he was “furious” with retailers for overordering cheaper New Zealand lamb when there was plenty of British product available.

“For the past two years, since the last really tough time, the retailers have promised greater support for British and long-term contracts.

“Some of them are doing that, but as soon as they get the opportunity to revert to type and make a quick buck, they are doing it.”

“NSA believes it is short-sighted for supermarkets to try to avoid paying for premium UK product, as in the long term it threatens the viability of sheep farms and the future supply of domestic product,” he said.

Prime lamb numbers through markets and abattoirs have been ahead of or close to those of last year most weeks in 2015.

The strong pound was also a factor in higher sheepmeat imports and lower exports in February.

High UK supplies look set to continue, with Eblex forecasting a 6% rise in production this year after good tupping and lambing conditions.

AHDB/Eblex senior analyst Debbie Butcher said the New Zealand presence would soon drop off, but it was having an effect when UK supplies were building.

“We have seen UK numbers coming forward in significant quantities,” she said. “We had a much bigger carryover and a bigger lamb crop last year.”

Asda said only 30% of its lamb products came from New Zealand and it was committed to increasing the number of British lines.

Sainsbury’s said its pre-packed lamb would be 100% British in the main season, while its meat counter and premium ranges were British all year.

“Each season is different and we adjust our sourcing accordingly – for example, we were able to extend the British season in January due to British availability,” a Sainsbury’s spokesman said.

Tesco said it was proud to be the biggest buyer of British lamb, but customers also recognised New Zealand lamb as a great-quality product.

“This helps us to keep lamb affordable for our customers and meet the demand for popular cuts,” a Tesco spokesman said.