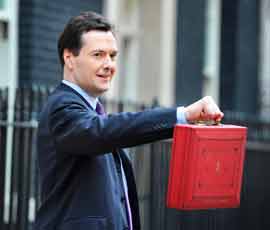 There was generally positive news for farmers and landowners in Wednesday’s (23 March) Budget announced by chancellor George Osborne.

Alongside the 1p/litre cut to fuel duty, many experts welcomed the extension of the small business rate relief holiday by one year, the doubling of entrepreneur’s relief to £10m from this April and plans to simplify the tax system.

Proposals to integrate the operation of income tax and National Insurance Contributions were particularly well received. “The potential merger of income tax and NICs is likely to simplify matters for rural employers in particular, who are frequently more hands-on in the administration of employment matters than larger firms,” said solicitor Claire Harris from Withers.

While there were few measures in this year’s Budget specifically targeted at rural landowners or workers, many of the wider policy changes should help small businesses reduce their administration costs, she added. “Importantly, there appear to be no changes introduced for APR [Agricultural Property Relief] and BPR [Business Property Relief], which could have negatively affected rural landowners especially.”

The government said it would restore Single Payment Scheme entitlements to the list of assets that qualify for Capital Gains Tax roll-over relief. “It is not clear from when this will take place, as the measure is included in the section for 2012, with consultation in June/July 2011,” said Carlton Collister from specialist advisers, Landtax.

Proposed changes to Furnished Holiday Letting (FHL) businesses were also confirmed, so that from April 2011 loss relief may only be offset against income from the same FHL business. From April 2012 to qualify in a year, a property must be available to let for at least 210 days (currently 140 days) and actually let for 105 days (currently 70 days), he explained

The reduction in corporation tax was welcomed, but was unlikely to affect most rural businesses as the small company rate for profits up to £300,000 was already 21%, noted Andrew Arnott, from Saffery Champness.

Potential changes to the planning system were also unveiled, with the government stating it wanted to introduce a “powerful new presumption in favour of sustainable development”. It also wanted to streamline the system for planning applications and introduce new fast-track planning for major infrastructure.

Mr Osborne announced an extra £2bn funding for the Green Investment Bank, which would launch in 2012, and said the UK would introduce a “carbon price floor” for the power sector.

But neither of these were likely to alleviate growing anxiety about the pace of delivery across the UK renewables industry, Renewable Energy Association chief executive Gaynor Hartnell said. “The Green Investment Bank announcement is welcome, but of limited early value given the very long delay before it can raise revenue,” she said.

“For farmers looking at diversifying into renewable energy, it is interesting to see that there is to be consultation from May 2011 on capital allowances claimed on generating equipment acquired where Feed-in Tariffs are claimed,” Mr Collister said.

“There is currently some uncertainty over the rate at which allowances may be claimed and it may be dependent on the business circumstances and the site of the installation. It is proposed that legislation will be introduced in 2012 that will clarify the appropriate capital allowances treatment of such expenditure and ensure more consistent treatment between businesses.”

“Good news on Green Investment bank, but still only amounts to three peanuts instead of one, given scale of investment needed – especially in renewables.” [Comment from Will]

“While road fund tax on heavy goods vehicles has been frozen by the Chancellor, nothing has been done to help the thousands of farmers who rely on 4x4s and light commercial vehicles to run their businesses.” Tim Price, NFU Mutual

You can read the transcript from Wednesday’s Budget as it happened at www.fwi.co.uk/budget2011