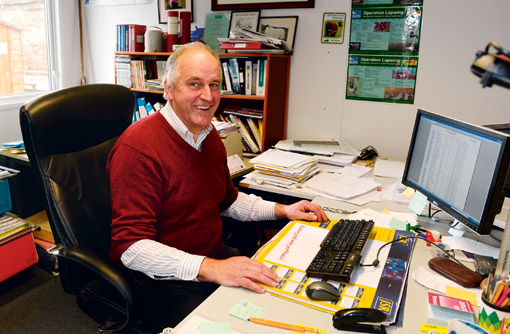 Every farmer across the country is counting the cost of 2012, and the Strathmore Farming Company is no different.

The 2,428ha mixed farm is currently undergoing a whole farm review and farms director David Soutar is implementing measures to try and safeguard the business against future periods of difficulty.

The Scottish government-funded whole farm review scheme provides up to 80% (to a maximum of £2,400) grant aid for the consultancy fees involved. A previous review was carried out seven years ago at Strathmore, although Mr Soutar and the team constantly re-evaluate what they are doing. “We are looking at all the things that caused us grief through 2012, the past winter and late cold spring and how we can improve on that,” says Mr Soutar, who is striving to build more resilience into the business.

Turnover for the 2012-13 financial year was up by £119,000, due mainly to improved pig and grain prices. However, increased feed costs and lower crop yields meant income available to invest was down to 6% of tenants’ capital against the 10-year average of 17%.

“We are a big business and we are diverse in some ways but with a year like last year we were exposed to everything,” says Mr Soutar.

Like most pig units, the Strathmore pig enterprise failed to make a profit in the past few years.

In fact figures for 2012-13 show average cost of production was 164p/kg against an average price received, including the premium for being Freedom Foods certified, of 153p/kg. This resulted in a total loss of around £116,000, says Mr Soutar.

In the future, he is considering several different management measures to reduce costs and keep up production – at the time of writing, the enterprise was near break even.

Due to the poor quality and availability of straw in the past couple of years, Mr Soutar is looking at investing in a new attachment which will produce two swathes out of the back of the combine harvester rather than one.

“The problem is that we get this 30ft mass of straw coming out the back. By halving the size it will dry quicker,” he explains.

In addition, he is costing whether or not it is feasible to roll out a novel new outdoor farrowing hut system, developed in-house, which has been trialled on 25 out of the farm’s 200 farrowing places. These would be an expensive investment, costing on average double the price of normal farrowing huts.

However, Mr Soutar believes they may be worth the money. The huts, which aim to keep sows warm in the winter but remove heat stress during the summer, have helped increase pigs born alive and weaned. Trials so far show an average increase of two pigs weaned a sow a year. With these there is also the possibility of changing from a three-week batch system to a weekly batch system – this could result in up to 3,500 extra finished pigs a year or a smaller number of sows required for the current finished pig output.

“It would save a lot on feed and labour costs,” says Mr Soutar. “We are also looking at different rotas and possibly having more staff but working less hours. The hours would be more targeted to the days they are needed.”

Stocking up on forage

Forage availability will be key to the success of the Strathmore beef enterprise this year.

“The consequences of 2012 and the delay of spring means there is not going to be grass about and the damaged grass has to be sorted,” says Mr Soutar.

In a bid to prevent future feed shortages, and in anticipation of less surplus silage on the market, extra forage crops have been planted. This includes 16ha of peas mixed with oats and vetch, and 10ha of a direct-sown Western Wolds ryegrass mixed with Italian ryegrass and red clover.

“Our main aim is to have enough forage on the ground to feed ourselves,” says Mr Soutar. “We have still sown 32ha of kale and where we have damaged grassland, we are sowing stubble turnips now to graze off in the summer time.”

Following a difficult year when contractors were extremely busy and most fields needed micromanagement for spring-sowing work, David is now reassessing the machinery used on farm and reviewing the business’ use of contractors.

“We are re-costing how much it would be to do some of it ourselves again,” says Mr Soutar. “The contractor option has been cheaper up until now but I cannot see it being sustainable because there are so few of them and they have their own skilled staff shortages.”

In addition, to bring some short-term financial resilience to the arable arm of the business, Mr Soutar has chosen to let out extra land for carrots and swedes this year in addition to the 141ha (348 acres) already let out seasonally for potatoes at more than £550/acre. A total of 19ha (47 acres) have been rented out for carrots at an extra income of around £600/acre, and some 11ha (27 acres) of swedes at £350/acre.

The business runs a graduate trainee scheme and aims to have two graduates and one or two modern apprentices on board at any one time.

One such graduate trainee is 20-year-old Morven Campbell, who joined last summer following completion of an HND in agriculture at Oatridge College. A new graduate from Writtle starts this week, specialising on the pig side of the business, while an additional enthusiastic young tractorperson, Ben Dorsie, has already been recruited to support Gordon Douglas with arable operations and he has had intensive sprayer training.

“This past year has put extra pressure on all of us that we wouldn’t normally have had,” says Mr Soutar.

The graduate scheme, which is aimed at approximately two years, is shaped around the business’ four key priorities – health and safety, animal welfare, environmental safety and profit. Graduates are given experience in different management areas including: people, livestock, crops, finance, environment and conservation. There is also a strong focus on personal development and Mr Soutar says this is where those who want to invest in their futures can apply themselves often outside their student comfort zones.