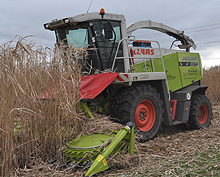 With the capacity to produce 500MW of renewable electricity, Drax power station in North Yorkshire claims its co-firing facility is the largest of its kind in the world.

The company has been generating electricity from burning biomass with coal since 2003 and now uses 1.5-1.8m tonnes of biomass a year, made up from a variety of UK and overseas sources, including miscanthus, cereal straw, peanut husks and sunflower shells.

It recently built a specialist 100,000t capacity plant to pelletise wheat and oilseed rape straw ready for co-firing and also has plans to develop three 290MW dedicated biomass plants in a £2bn partnership with Siemens.

But while the industrial-scale processes may seem far-removed from agriculture, Drax’s Rob Wood says the two are closely linked. “The harvest, storing and management of straw all influence the energy output we can get from it,” he says. “It’s in everyone’s interests if we can work together to get this right.”

Moisture content is the critical factor, especially for wheat and rape straw going into the Goole straw pelleting plant, situated about five miles from the power station. The pelleting site began production 18 months ago, supplying pellets that are then crushed into powder and blown into Drax’s furnaces for burning with coal dust.

“We burn everything as a dust in suspension, as it means we can be more flexible when balancing energy supply to the grid as demand fluctuates,” he explains. “For us, pelleting straw makes a lot more sense than burning it directly in the furnaces and the layout of the power station means it would logistically be difficult to handle and store the large volumes of bales required.”

The pelleting site mainly uses wheat and oilseed rape straw currently, but the process is being trialled with miscanthus, which is currently processed at the Drax power station site before burning.

All bales are automatically moisture tested as they are unloaded and if just one exceeds the 18% maximum, the whole load is rejected. Allowing wetter material into the automated process would cause blockages further down the line, especially when bales are shredded and fed into the grinder, Mr Wood explains.

“Straw is a very variable product, especially where moisture content is concerned, but we actually reject very little now,” he says. “It’s about educating and working in partnership with farmers to improve the storage and quality of bales. If they’re barn stored, or covered and kept dry, it does produce better quality straw and reduces the chance of rejection.”

Mr Wood says there may be some leeway on contracts in exceptionally wet or low-yield years, but generally contracts are “firm” which means growers are expected to deliver the pre-agreed amount. “We need the straw supply to keep the plant running 24-7, so we tend to agree contract volumes based on what can be delivered even in a bad year.”

Because the whole process is automated and runs non-stop, bale size is also a critical factor and contracts have fairly strict criteria (see table). Bales that are too wide or long, for example, may not fit through various parts of the system and could disrupt sensors. “It’s something to check, especially where bales have been stacked for a while and may have got a little out of shape,” Mr Wood notes.


How is straw pelletised? 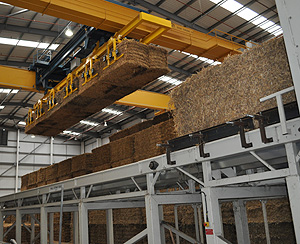 • Barcode on crane records precise location of each raft

• Bales are fed into shredder to be dismantled 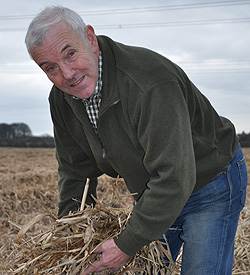 Chris Bradley almost gave up on growing miscanthus in the early years, but he now believes that sticking with it was one of the best decisions he made and is considering increasing the area this year.

Mr Bradley, a tenant farmer 20 miles from Drax, first planted the crop in 2006 on an area of light land prone to wind erosion. Some 50ha (125 acres) is now in the ground, about half of the farm’s arable area.

“At the end of the first year all I wanted to do was plough it out,” he acknowledges. “But I was told I’d have to pay back the [establishment] grant, so decided to stick with it.”

He managed to get a small 5t/ha yield off the crop in the second season and after a bit of re-planting, this steadily increased to an average of 14t/ha last year. “There’s no way I’d plough it out now,” he says. “I enjoy growing it and I’m not investing in all those inputs needed for growing cereals. We’d struggle to get 7.4t/ha (3t/acre) from wheat or barley on this land anyway, and with the way cereal overheads have gone I reckon our margin from miscanthus will be better, even with the current wheat prices.”

Soil erosion problems have also been reduced, he says. “We’re not disturbing the soil every year and the leaf material left on the ground means it is quite easy for machinery to travel on fields, even after wet weather.”

Mr Bradley says the crop’s ease of management once established is also a big draw. No fertiliser has been applied to his crop, yet since growing it the potash index has been maintained at 2.5, while the phosphate index has increased by one, he says.

Weed control, especially during the establishment phase, is the main challenge, especially as miscanthus will be in the ground for 15-20 years, he says. “We went over with Roundup (glyphosate) and ploughed after the last cereal crop, left it over winter before a light harrow ahead of planting. We used a pre-em spray for annual weeds and sprayed for thistles in the second year where they were a problem.

“Once the crop’s established though it does a pretty good job of smothering the weeds and doesn’t really need much work. It’s a lifestyle thing – I’ll be 60 next year, so I’m looking for an easier crop to grow.”

Mr Bradley is responsible for deciding when the crop is dry enough to cut, although harvesting is carried out by an International Energy Crops contractor at a cost of £75/ha. Baling into 630kg bales is also contracted out, costing £6 a bale. The 2011 contract price with Drax will be around £53/t ex-farm at 15% moisture and he estimates that with a further yield improvement, this should result in a margin of £600/ha.

All bales are stored on an area of hard standing until they are collected by Drax. “Our contract states they’ll be cleared before August, but last year they were off the farm in three and a half weeks,” he says.