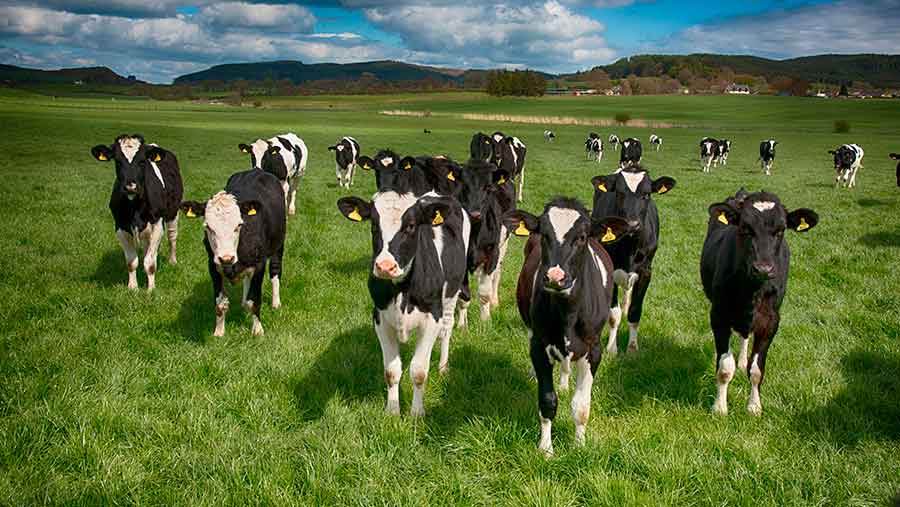 FBI equates to net profit, and is the total income available to cover unpaid labour and capital invested in the business. Income from diversified activities is included in overall FBI.

Farm business incomes in Scotland have risen by 19%, but the headline figure masks a continuing dependence on support payments, says the Scottish government.

Of the sectors, dairy had the largest increase, with an average income of £73,100.

This was largely down to a 22% increase in the average price of milk, to 28p/litre during the 12-month period.

A Scottish government spokesman pointed out that the new data shows how the farm sector has bounced back from the low of £16,800 in 2015-16.

See also: Peer-to-peer lending for farmers: What you need to know

But the spokesman said without EU support payments included in the calculation, more than 60% of farms failed to make a profit.

Once payments were removed, the average income fell to a £7,400 loss.

The largest losses recorded were on sheep and beef farms in less favoured areas.

Without support included, these units posted average losses of £27,400.

As well as the importance of support, the government report showed contract farming and diversification also helped to offset losses from agricultural activity.

Diversified farms had incomes about £19,600 higher than those that had focused solely on agricultural production.

However, the amount of assets held by farms decreased slightly over a three-year period, while debts rose, although were still relatively low compared with other types of business, to equal 12% of the value of assets.

Despite the concerns over the degree to which incomes are supported by EU subsidies, Scotland’s rural economy secretary, Fergus Ewing, welcomed the improvement in the headline figures.

“It is pleasing to note that cereal farms experienced a six-year-high income, while dairy and general cropping farms continue to recover from the problems experienced in 2015-16 due to low milk prices and subsidies, though they remain sensitive to market and economic fluctuations,” Mr Ewing said.

“But these figures also mask the stress that many individual farmers and crofters tell me about, due to severe financial pressure and thin margins they are facing,” he added.

“Worth about £500m a year, the statistics show the importance of continued EU funding to Scotland’s farmers in supporting jobs and sustaining rural businesses.

“It is clear that if we want sheep on hill and cattle in fields then we need to continue to support our farmers,” Mr Ewing said.

His sentiments were echoed by NFU Scotland director of policy Jonnie Hall.

“Reliance on support payments, together with increasing diversification, are symptomatic of farming enterprises that cannot rely on adequate and stable returns from the marketplace to offset costs that continually creep upwards,” Mr Hall said.

“Add in that increased farm debt is likely to be feeding working capital and cashflow needs, rather than investment, then questions have to be asked about the confidence and financial resilience of many farm and crofting businesses.

“What is unequivocal is that Scottish agriculture is in clear need of a new policy settlement that enables every farm business to adapt to a new operating environment, through innovation and investment,” he said.

Statistics included in the annual income figures are based on a Farm Business Survey that audits a sample of almost 500 commercial farms in Scotland. The survey collects a range of data on the financial health of the farm using the farms’ accounts. The survey does not cover small farms or pig, poultry and horticulture sectors.