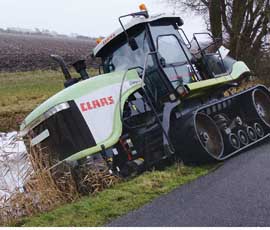 Northern Ireland’s Health and Safety Executive is launching an initiative to cut the number of farm deaths.

Last year’s figures show a farmer was killed every month while working on a farm in Northern Ireland.

The six-week long HSENI initiative will start in February with a series of farm visits. Officials will speak directly to farmers and their families about how they can prevent injury and death.

Teams of staff will be raising awareness of safety within four key areas: unguarded machinery, handling livestock, falls from heights and incidents involving slurry tanks – all of which have been identified as the main causes of farm fatalities in NI.

HSENI officials will also work closely with the Ulster Farmers’ Union and the Department of Agriculture and Rural Development to develop a farm safety partnership.

“After the terrible situation we had in Northern Ireland last year we decided we needed to get other groups involved,” explained Malcolm Downey, from the HSENI.

“Our aim is to raise the profile of health and safety, by getting people thinking and talking about it. It is really about getting people to stop, think and improve things to keep themselves safe,” he added.

Mr Downey said the HSENI’s goal was to get the death toll down to zero.

Meanwhile Farmers For Action has requested a meeting with DARD’s farm safety division to discuss the issue.

The FFA said although increased inspections may help, they would not fix the problem completely.

Instead FFA is calling for the HSENI to show greater support for its Welsh, Scottish and English equivalents.

It also wants the executive to put pressure on DEFRA secretary Caroline Spelman to take the case to Brussels and try to get the issue addressed in the new CAP 2013-19 reforms.

“HSE must put the case that farmers desperately need a financial safety net in place before safety issues can be properly addressed and point out to the EU Commission that failure to do so will cost many more lives,” said a FFA spokesman.