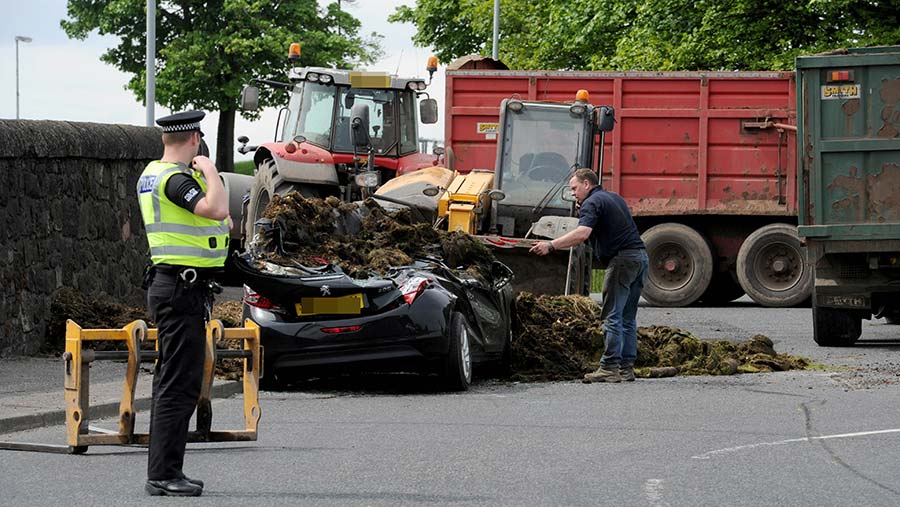 A young tractor driver who crushed a car by tipping a load of manure over it has been convicted of dangerous driving.

Logan Boyd, 19, lost control of his Massey Ferguson tractor and trailer at a roundabout in Paisley, near Glasgow, forcing the driver and passenger of a black Peugeot 208 hatchback to flee out of a window to escape the deluge of dung.

Paisley Sheriff Court heard that farmworker and landscaper Mr Logan struck the central hub of the roundabout, which links Ferguslie and Station Road, with such force that he tipped his entire load on to the Peugeot which was beside him.

Driver Michelle Wiseman and passenger David Whiteloch were forced to climb through the window to avoid being crushed by tons of manure during the incident, which happened on 21 May last year.

Fiscal depute Claire Rowan told the court: “The accused was working in the capacity as a driver for Albair Landscapes Ltd and was also travelling westbound. He was driving a Massey Ferguson tractor towing a trailer which was fully laden with a quantity of manure.

“As he approached the roundabout at the junction of Ferguslie with Station Road, the Peugeot was in lane one, the tractor was in lane two. The accused failed to appreciate the width of the tractor or trailer. This meant he mounted the main hub of the roundabout. The trailer began tipping to the nearside.

“Witness Ms Wiseman saw the trailer tip towards her vehicle and moved to her nearside as it landed on top of the Peugeot.

“The weight of the trailer crushed the Peugeot, forcing the pillar down to the steering wheel and folded the driver’s seat in half.

“Both witnesses had moved to the nearside of the car. Both managed to escape from the passenger side window.”

The court heard that Ms Wiseman and Mr Whiteloch were taken to Paisley’s Royal Alexandra Hospital where they were treated for minor injuries.

He admitted failing to maintain control of his tractor and trailer, causing the trailer to flip and crush the vehicle driven by Ms Wiseman, causing her and her passenger to take evasive action to avoid injury and extensively damaging her vehicle.

A defence lawyer for Mr Boyd said: “He wishes to apologise and wants to express his deepest regrets for his actions. He also wants to compensate his victims for what he has caused them.”

Sheriff Tom McCartney adjourned sentencing Mr Boyd until 16 April to obtain background reports. He also disqualified him from driving in the meantime and freed him on bail.