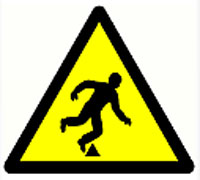 A farm worker dubbed one of the most accident-prone men in Britain is in hospital again after his legs were crushed by a JCB.

Mick Wilary of Stanley, County Durham, was pinned against a wall after his JCB lurched forward while he was shovelling feed into it.

His left leg was pushed to his shoulder while his right leg was twisted so far it faced the wrong way.

Despite the terrible injuries doctors have saved his legs and say Mr Wilary will be back on his feet in six months.

Last month’s injury is one of 30 Mr Wilary has racked up over his career.

He has broken 15 bones, including both ankles after he fell over a potato and his collar bone after he fell off a horse which had been spooked by a plastic bag.

Mr Wilary, who admitted he was “accident-prone”, also split his head open by falling over a cat, fell out of a raised bucket of a JCB and cut off the end of his finger with a Stanley knife.

Over the years he also managed to stab himself in the stomach when cutting through a stick, broke his ribs when grain in his trailer tipped to one sige and pulled his tractor over and broke his fingers with a hammer.

“It’s important to keep bouncing back when these things happen,” he told the Telegraph.

“I guess it’s lucky I don’t drive. I only have a tractor licence.”

He said he thought he had lost his legs following the latest accident, but doctors at Newcastle Royal Infirmary managed to save them after he was airlifted to hospital.

His wife Evelyn said Mr Wiley’s accident-prone ways had become “a bit of a joke”.

“If it’s going to happen and someone’s going to get injured it will be Mick,” she said.

“He is just one of those people. If his friends want to know if a fence is electric they wait for Mick to touch it to find out.

“But nothing gets him down, he never blames anyone else for his bad luck.

“He has always been a hard worker so it is killing him not being able to work.”