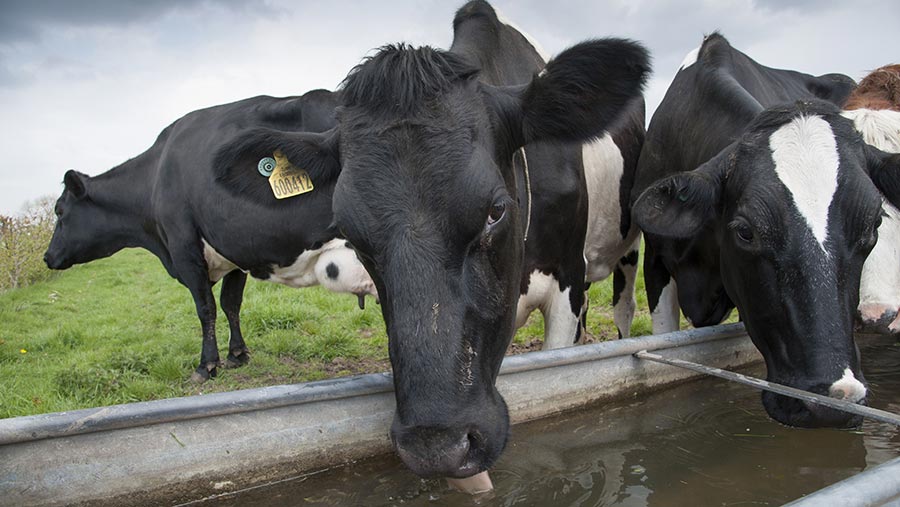 High production costs and the slow pace of farmgate price rises point to a drop in profit for milk producers in the year to March 2019.

A report by the Farm Consultancy Group (FCG) in conjunction with accountant Old Mill shows a projected profit of £240 a cow for the average herd in a study of the firms’ clients, which is £143 a cow lower than in the year to March 2018.

This is based on an average milk price of 32p/litre – evidence of the large proportion of herds in the sample that are on constituent contracts, producing high butterfat and protein milk.

In contrast, Defra figures show that average farmgate milk prices have only been above 30p/litre in four of the past 12 months, although they are likely to reach 30p/litre for October.

The Old Mill/FCG figures include a £30,000 charge for unpaid labour and include non-milk income, mainly from cull cow and calf sales.

However, they are before rent, finance and BPS payments, to standardise the figures and allow for comparison between farms.

There are some stark contrasts in performance between the top 10% and bottom 10% performance.

At 330 head, the poorest performers have an average herd size almost 50 cows higher than the best performers.

Their costs of production, at £2,756 a cow, are £821 a cow higher than their top-performing counterparts.

“With higher cow numbers, they should have been able to spread their costs further, but their labour, machinery and variable costs a cow were all significantly higher,” says Phil Cooper of FCG.

“In addition, both milk yields and milk price were lower among the bottom tenth of producers – all of whom calved year-round – resulting in a loss of £333 a cow compared with a profit of £925 a cow among the top 10%.”

The Dairy Group’s Nick Holt-Martyn said UK supply was holding up better than expected, down -0.7% in August on August 2017, while September is expected to be 1.155bn litres (-1m litres) lower than the same month last year.

Supply is expected to continue to be close to 2017 through the autumn, says Mr Holt-Martyn.

“However, rises in feed costs of up to £40/t on the year will mean a 15-20% rise in cost of production over the next nine months.

These costs include rent and finance, as well as just over 3p/litre for the value of unpaid labour.

The pressure on feed prices made it very important to shop around and make sure farmers were getting the best price and value for feed, said Mr Holt-Martyn.

Milk production is showing little or no immediate effect from the hot, dry summer, said the AHDB.

The effect of this has already been seen on wholesale markets, with prices falling for butter and cream, while mild cheddar prices have held firm for most of the month.

The New Zealand-based GDT online dairy auction saw a drop of 1.9% in its price index at Tuesday’s (2 October) sale – the same level as in October 2016.