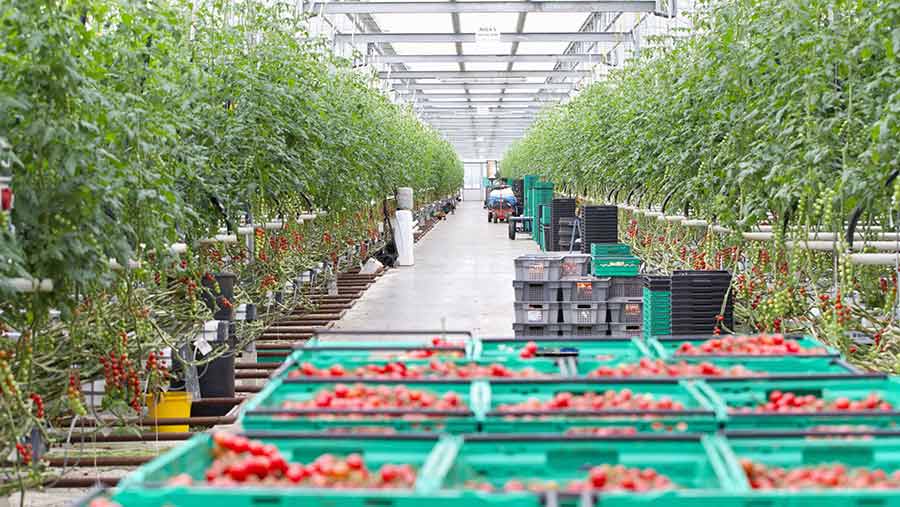 A major new glasshouse is opening in Essex following a two-year legal battle by growers to secure planning permission.

The first phase of a 9.7ha expansion scheme was unveiled by Valley Grown Nurseries unveiled at Nazeing, near Harlow, on Friday (20 May).

NFU president Meurig Raymond described the glasshouse as good news for British growers, the British public and the British economy.

“Self-sufficiency in the horticultural industry has fallen for a number of years,” said Mr Raymond at the glasshouse opening.

See also: Planning permission – how farmers can get it right

“We now import four out of every five tomatoes eaten in this country, at a time when the public is actively seeking to buy quality British produce.

“There is tremendous scope to grow more salad crops to meet public demand, but modern agriculture and horticulture require investment in modern buildings and modern facilities,” he added.

“That’s why this new development is so welcome.”

Lee Stiles, of the Lea Valley Growers Association, said developments such as the glasshouse would help ensure the area had a viable economic future.

“We have a great opportunity to grow more local food, reduce food imports and create local jobs through glasshouse expansion in the Lea Valley.”

The development represents the largest addition of glasshouses to the Lea Valley since the 1950s, with the new structures used for growing tomatoes and sweet peppers.

Valley Grown Nurseries obtained planning permission in 2014 to construct the glasshouse within the Green Belt, but the decision was challenged by Lee Valley Regional Park Authority.

The authority unsuccessfully took its case to the High Court and then the Court of Appeal. The NFU provided support to growers during the appeal process.

Jimmy Russo of Valley Grown Nurseries praised the union and the Lea Valley Growers Association for helping to make the expansion scheme possible.

“After several years of uncertainty, and huge financial costs, we are delighted that Epping Forest District Council has been fully justified in granting planning permission.”

Mr Russo added:” It is great news that the challenge has been dismissed and we can now get on with growing fantastic food.”

Situated just north of London, the Lea Valley had the highest concentration of glasshouses in the world in the 1950s, but the growing area has since declined by about 80%.

Today, there are 121ha of specialist glasshouses, where growers produce 80m cucumbers and 70m sweet peppers annually, as well as other salad crops.