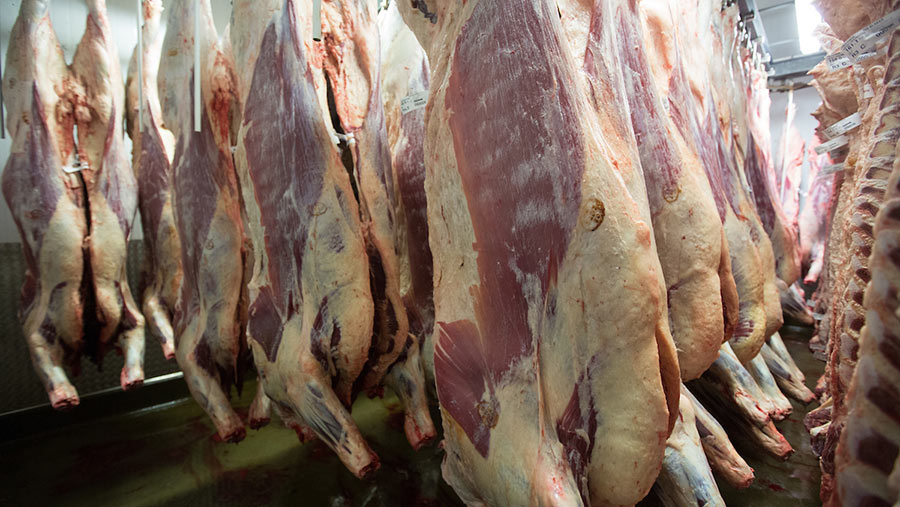 Farm leaders have urged retailers to back British beef after it emerged some had imported cheap mince from Poland to meet soaring demand.

While Mr Royle said he understood the short-term explanation for the move (see “Why did the retailers buy Polish beef?”) he said it would infuriate farmers.

He urged retailers not to use cheap imports that could put pressure on UK farm businesses. Instead, Mr Royle called on them to support British producers during the coronavirus lockdown.

“There is enough British beef to meet demand, and we are issuing a plea to supermarkets to back us at this difficult time for the nation,” Mr Royle said.

His concern that retailers could look to imports, was heightened by information showing Ireland had huge stocks of surplus beef, originally destined for the EU food service.

The NFU is also concerned about the possible effect on values caused by so-called carcass balancing. Each carcass has a variety of cuts – from premium, such as sirloin, to forequarter, which yields meat for mince.

With the demand swinging towards cheaper mince, there is a risk that the top-end cuts could be devalued.

“As supplies of beef suited to mince are used up, there is a temptation to put better-quality meat through the mincer,” Mr Royle said.

“However, there is a ceiling on what shoppers will pay for a packet of mince, so the effect is the high-end meat is sold too cheaply,” he added.

It means that even though demand has rocketed, there is still a downward pressure on the carcass value as a whole.

To avert this situation, Mr Royle called for promotion of the premium cuts so that shoppers continued to buy products across all of the carcass range.

AHDB Beef and Lamb strategy director Will Jackson agreed that carcass balancing was a problem and explained how the levy board was tackling the issue.

“We are already sending out information that shows consumers how to make use of a wider range of cuts,” Mr Jackson said.

The increased activity was being carried out via repurposed recipe packs sent to butchers and ideas on how to cook beef and lamb through social media.

He explained that the approach was aimed at helping people cope with the lockdown rather than a high-profile advertising campaign.

“In these tragic circumstances, when people are struggling mentally, physically and financially, it would be wrong to have an in-your-face promotion of premium products,” Mr Jackson said.

“Until a new pattern of buying red meat emerges in the coming weeks, our approach will be to help people make the best use of all the food available,” he added.

Why did the retailers buy Polish beef?

Since the coronavirus crisis developed, demand for red meat at supermarkets has risen by 150%.This demand level has not been seen across the range of cuts.

At the same time, demand from the food service industry has dried up as restaurants and other food outlets have been forced to close.

This switch has had a significant knock-on effect on the processors with an extensive rejigging of production lines needed to meet retailer specifications.

Furthermore, processing facilities that have operated as many as eight different lines have reduced these to just two.

The streamlining is necessary to cope with potential staff shortages as the virus spreads and more of the workforce self-isolates. While this reconfiguration was carried out there was a hiatus in production.

To maintain supply, some retailers, bought in beef and mince produced in ABPs Polish processing unit. This short-term supply was branded with the ABP logo.