For any wind power scheme to be successful, fundamentally, it must be in the right location. The proposed site must be sufficiently windy and close enough to a national grid connection point to make the project viable.

And to generate sufficient additional revenues, any proposed wind energy project must produce enough electricity to sell to a power company. This need not mean dozens of turbines. Indeed, several recent projects involving three or four turbines have proved successful.

Income generated will vary depending on the size of the turbines, local wind speed, and the level of equity retained by the landowner. Farmers can expect to earn up to £4000 a year for each turbine, which, including foundations, cabling and access roads, will take up less than an acre of land.

One of the most attractive features of diversifying into wind turbines is that, once installed, arable farming can continue around them – turbine foundations are buried below normal ploughing depth. 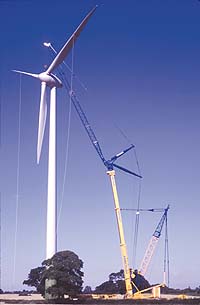 Planning consent
The next most important ingredient for a successful farm-scale wind project will be negotiating the planning process.
Early contact with the local Planning Authority is essential to establish any problems or objections that cannot be negotiated. A key feature of this stage will be the Environmental Impact Assessment (EIA).

The EIA constitutes a detailed assessment of a range of environmental issues, such as the likely impact on wildlife and the landscape, and often involves consultation with bodies such as the RSPB or Natural England.

Opponents to wind farms often cite noise pollution and the visual effect on the countryside. However, modern turbines are quieter than their predecessors and, while there may still be some concerns about the visual aspect, many now appreciate their beauty.

The scheme is monitored through Renewables Obligation Certificates (ROCs). Energy suppliers collect ROCs to demonstrate their compliance, and those who do not meet their obligations must pay a fund that is then redistributed among suppliers according to the proportion of total ROCs they have submitted.

The scheme motivates electricity providers to seek Power Purchase Agreements (PPAs) with generators of renewable electricity. A PPA is a contract between a producer and a supplier for the sale of generated electricity over a specified period of time and will be vital to the financing of any farm-scale wind project.

Financing the project
The costs of establishing a commercial wind-farm are likely to run to millions of pounds. There are generally two types of financing available to farmers – equity and debt.

Equity finance refers to the sale of an ownership interest in the wind project, while debt finance entails borrowing money from a bank or other lender to meet the initial costs. Virtually all projects will involve a combination of equity and debt financing and the choice of partners is crucial.

Some lenders have specialist renewable project teams. They provide a one-stop shop for developers requiring advice and funding.