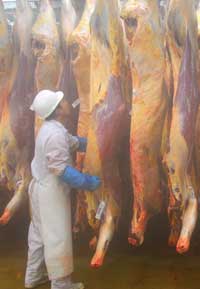 Deadweight cattle prices have continued to ease over the past three weeks, with GB R4L finished steers dropping from 280.8p/kg in the week ending 6 March to 278.3p/kg now. That is 7.5p/kg down on the same week last year.

Meanwhile, exports of fresh and frozen beef in January fell by 7% year on year, to 7300t. Exports to Ireland dropped by 20%, but trade with The Netherlands strengthened by 9%, to account for 38% of all UK exports, according to the Agriculture & Horticulture Development Board. “Despite the reduction in volume, the value of exports, at £22m, remained at a similar level to January 2009,” said its most recent market report.

Beef imports rose by 1% in January, to 17,500t, with shipments from Ireland up by 3%, to account for almost two thirds of UK imports during the month.

“Supplies from The Netherlands and Germany were substantially lower year on year, in both cases down almost 40%. As imports from Brazil are almost non-existent the UK imported 37% more Uruguayan beef than it did in January 2009.”