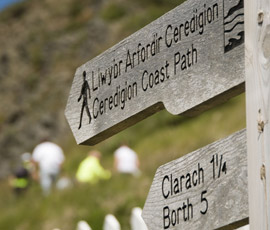 Farmers fear that cattle production on some Welsh farms could be restricted if plans to update Wales’ public rights of way network go ahead.

The Welsh government is currently reviewing all legislation relating to access and outdoor recreation in Wales.

Although this would provide clarity and certainty over where people can go and what they can do, the Farmers’ Union of Wales is concerned about the implications for all farms, in particular those that graze cattle.

Gavin Williams, who farms at Holyhead, Anglesey, said although recreational opportunities in the countryside are important for tourism and health, any changes to access should come through discussion and partnership in areas with a real demand. He believed a statutory approach could severely affect the business and management decisions of farmers.

“The union would encourage farmers and landowners to get involved with the early discussions of the Green Paper by contacting their FUW county offices or the Welsh government directly, so their views can be included as early as possible in the pre-consultation discussions,” said Mr Williams, the FUW’s land use and parliamentary committee chairman.

Although the union supports the rationalisation of the public rights of way system with a view to developing circular or linked networks, it believes it could hamper livestock farming if there is a presumed right of access to farmland, especially land that sits alongside inland waterways.

The pre-consultation stage of the review will run until the end of the month and will be followed by a Welsh government Green Paper consultation during December.

Know the law when farming near footpaths