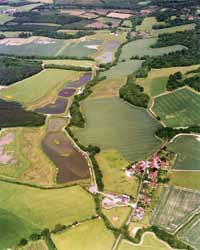 Farming remains HSBC’s “preferred sector” to lend to according to its new head of agriculture, Allan Wilkinson.

Speaking on the opening day of Cereals 2010 near Royston, Mr Wilkinson said that although there would inevitably be changes to farm subsidies in the next round of CAP negotiations, the political will to support rural enterprise would remain and reform would not affect the bank’s support for the sector.

“In a perfect world, it would be superb if the industry drew its returns from the marketplace,” he explained. “But farming is not just about food production and therefore I am not surprised subsidies are a huge part.”

But while EU support would continue to underpin farm businesses for some time to come, the recently-appointed head of the bank’s agriculture team said much had changed since he was last involved in the sector.

“I am really optimistic about the opportunities available. People are collaborating more. And more people are employing experts to market their grain. It’s all much more joined up than seven years ago.”

And he said farmers were well placed to seize those opportunities.

“Agriculture can take advantage because it has the skills, resources and capital. Most farm businesses are incredibly strong compared with other commercial businesses I’ve dealt with.”