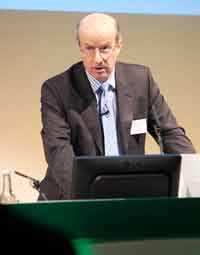 Farming across three EU member states has allowed the Shropshire Group to expand to 12,000ha (29,652 acres) in a bid to become lowest cost producer, supplying 50% of the UK market in some types of produce.

Growing mainly salads and vegetables at this scale brings many challenges for the £300m turnover business operating in the UK, Spain and Czech Republic, said John Shropshire, chief executive officer of marketing arm G’s Marketing at the Sentry conference.

Currency has a massive impact on the business and in the UK, seven customers buy 87% of fresh produce, to exacting quality standards. For example, the margin of error for meeting order deadlines or rejection at delivery is only five packs of lettuce in every 10,000.

“That’s extremely tough when they are being ordered mid morning for delivery that afternoon,” said Mr Shropshire.

“Scale enables us to employ the best and invest in the best. We want to be the employer of choice.” The group employs up to 4500 people at peak times and has 2000 bed spaces in hostels as well as language training facilities.

Harvesting machinery moves to Spain for the winter and back to the Czech Republic for summer. Spain was the largest and toughest market to operate in, needing the most investment, management time and determination, said Mr Shropshire.

“Costs were lower in Spain but now they are coming up; it’s more expensive because of the fall in the pound.” Czech labour and some input costs were lower.