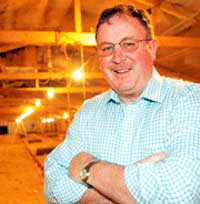 “I am delighted with the votes which show how highly my European colleagues regard UK farming. My task now is to make sure that the voice of the working farmer is heard during commission meetings on a range of issues,” said Mr Bourns.

“This is a crucial time for UK egg producers, given the EU’s Welfare of Laying Hens Directive is due to come into force on 1 January 2012.

“I will make sure that the commission listens to our concerns about competitive disadvantages for UK farmers who have made huge investments to comply with the new enriched cage requirements.

“Producer communication with the EU’s 495m consumers will also be a key issue during my mandate. The NFU has been lobbying fiercely for mandatory country of origin labelling on poultry and other products so that farmers’ produce can be better represented on the supermarket shelves.”