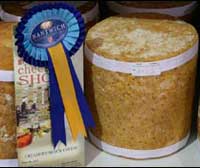 Milk Link has scooped an impressive 48 awards at the Nantwich International Cheese Show in Cheshire.

The main award went to the company’s Lockerbie creamery in Dumfriesshire, which won the Reserve Supreme Champion (UK) trophy for its mature cheddar and the Danisco trophy for best vegetarian cheddar.

A further 10 top prizes were won by Milk Link’s creameries. Taw Valley creamery in Devon won several, including five for its vintage cheddar and Double Gloucester; plus further gold awards for its Red Leicester and organic cheddar.

Reece’s Creamery in Malpas, Cheshire, won the Daresbury Cup in the Champion Farmhouse Coloured Cheshire, and two golds for its traditional Caerphilly and Cheshire cheeses; and Tuxford & Tebbutt Creamery in Leicestershire won the Cooper Thornhill Trophy for best vegetarian cheese and a further gold award for its mature Blue Stilton.

Milk Link chief executive Neil Kennedy was “thrilled” that the quality of the company’s cheeses had been recognised at the show, especially as Milk Link’s products were in competition with 2655 other cheeses from over 30 countries. “Of course, we could not enjoy any of this success without the expertise of our dedicated workforce,” he added.

Want more cheesy stories? If so, find out how an attempt to launch a piece of farmhouse cheddar into space ended in failure and read about the discovery of the cheese lost in space.