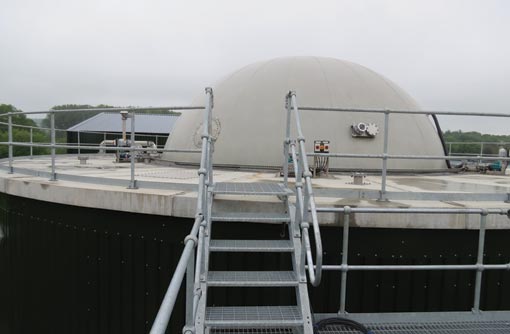 A group of south-west farmers has launched a new company to install and promote on-farm anaerobic digestion plants.

Greener for Life (GfL) has teamed up with city financiers, two British technology providers and other AD specialists to offer a one-stop-shop for anyone looking to build their own plant. It is offering to manage all aspects of the AD development process, from initial project feasibility, grid connections and planning, to financing, building and operating the plant.

Company founder and Devon dairy farmer Winston Reed says funding can be tailored to individual farmer requirements and capital available, although GfL can meet the entire project cost and take all risk if necessary.

Plant operation, manure, digestate and crop management can be tailored to suit each farm business and. Farmers are offered payments for lease of the site, a performance bonus, payment for manures and a premium over the cost of production for any crops grown.

“Farmers are under increasing business pressures, whether that’s from ageing slurry stores or bovine TB, and have varying access to funds, so just don’t have the time to fully investigate building an AD plant on their farm,” says Mr Reed.

The company’s focus is on developing plants that use plug flow digester technology rather than a continuous stirred tank. The plug flow system acts in a similar way to a giant intestine which, Mr Reed says, gives a longer feedstock retention time and up to 20% higher gas yields from the same inputs. Plant size can be anywhere from 50kW-1MW or larger, depending on individual site circumstances.

One of the first projects to go through the GfL scheme is the 500kW combined heat and power facility at Stuart Cole’s farm near Tiverton. The plant is going through planning and once operational will generate power and heat for his 60,000-bird free-range poultry unit and other farm buildings.

Feedstocks will include litter from his own chicken enterprise plus some bought-in litter, along with energy beet, maize and grass silage mostly grown on the farm, but some will also be sourced on long-term supply agreements from local farmers.

“GfL does get farmers working together and opens up opportunities to get involved with AD even where farmers can’t put up their own plant,” Mr Cole says. GfL will fund the entire project cost, which is likely to be around £2.5m once all buildings, equipment, groundworks and new silage clamps are included, he says. “Cost is higher because we’re building the plant away from the existing poultry unit for biosecurity reasons because some litter will be brought in.”

Mr Cole advises any farmers considering AD to look at grid connection and grid capacity first, especially where there may be other local renewable energy projects already supplying electricity or gas.

If going down the combined heat and power route, he advises people to ensure there is a good, consistent demand for heat and to consider alternative uses where possible. “For example, the poultry unit is a good user of heat, but there are still periods where demand is less, so we’re looking into potentially drying woodchip or digestate.”

He also says it is important to find a site that will appease neighbours as much as possible and to make sure a robust traffic assessment is carried out. “AD is still a relatively new technology for most of the general public, who don’t necessarily understand the complexities of it, so it’s vital we get the messages across clearly.”

GfL also hopes to encourage more collaboration between local farmers. This could be achieved through clusters of smaller gas-to-grid plants that each pipe biogas to a single site, which then cleans the gas and injects it into the grid, or through farmers entering long-term feedstock supply agreements with local plants.

“Whether you can afford to take a financial stake in an AD plant or not, we believe there is an opportunity for anyone to get involved somehow.

“We want people to keep their core business and this can be a way of helping support that.”

A longer-term aim is for dairy farmers working with GfL to see further benefits when the second phase of the project goes ahead, hopefully later this year.

This would see the establishment of a GfL farmers’ co-operative and GfL farmer accreditation under the GfL brand. Milk could then be contract packed under the GfL brand through an existing processor relationship and hopefully achieve a better margin from the supply chain. Mr Reed hopes the branding could be broadened to other products.