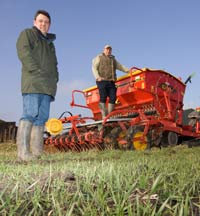 The independent streak in most UK farmers means co-operation is generally more promoted than practised. But two East Anglian growers have found significant advantages in getting together.

Andrew Charlton and Giles Shakespeare both took over tenancies on Norfolk County Council’s Stow and Marshland estate in 1999.

“We’re only three miles apart and occasionally helped each other out informally,” says Mr Charlton.

“It was the very wet cereal harvests of 2005 and 2006 that really drove home the limitations of doing harvest all on your own. Our work rates were no more than 4-5t/hr, so we were unable to get crops into store at their best.”

A slightly more formal agreement was launched in late 2005, the key being the pair’s decision to get rid of a 30-year-old Claas Dominator 85 combine and a shared Claas Dominator 106, replacing them with a 15-year-old New Holland TX34. They also bought bigger trailers, raising capacity from 6-8t to 11-12t.

The original TX34 has since been traded in for a TX36 in 2006, which in turn is being changed for next harvest in the drive for greater output.

From the outset all machinery has continued to be individually owned, Giles having the combine and Andrew the trailers and other equipment.

“This has two advantages,” says Andrew. “First the accounts for each business remain relatively straightforward because depreciation, repair costs and the like don’t need allocating between the two. Second it’s much easier to identify running costs.”

To pinpoint these, a simple single A4 costings sheet based on John Nix’s Farm Management Pocketbook figures was drawn up before the agreement began.

A key point is that all fuel must be provided by the person on whose farm the work takes place. “Diesel costs can be a source of conflict where one farmer carries more than their share of a burden. This arrangement avoids any confusion,” says Giles.

The objective is to achieve a “nil balance” by the end of the year, he says. “In other words the work we do for each other has equal value.”

In practice that’s not as difficult as it might seem. “Most of the time we’re working in the same field together, and although the hourly rates might be different, the bigger farm has the more expensive kit which tends to level the costs out.” 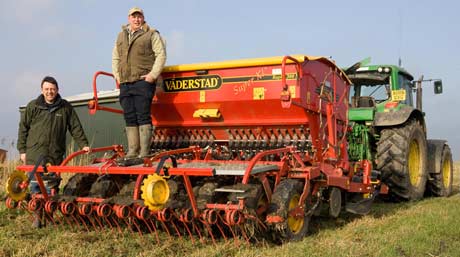 The agreement’s coverage expanded to include trimming dykes and hedges. “It’s proved worthwhile keeping one of the farms’ old hedge-cutters going through having more work to do,” says Andrew.

In 2007 a similar decision was taken over cereal drilling. Until then two power harrow/drill combinations had been the farms’ mainstays.

They were replaced by a 4m power harrow and a 3m Vaderstad Rapid drill to speed work rates and achieve better establishment.

So what have been the overall benefits?

“It means the farms are better placed to harvest grain when it’s drier and particularly in better condition.”

Drilling output has also risen – from 6-7ha per 3m machine a day to over 20ha a day from the power harrow/Rapid set up, and establishment and yields have improved.

Andrew’s organic winter wheat yields have risen from about 6.5t/ha to over 7t/ha (7.4 in 2008). “I’m convinced this is largely due to better establishment.”

Both farms remain financially and managerially separate, no formal agreement has been drafted, and the annual review meeting to tidy up the odds and ends takes only about half an hour, says Andrew.

Combining the organically and conventionally run farms poses no conflicts in terms of their assurance. As both produce seed, combine and drill cleaning are part of their normal routine, he says.

“Actually, it’s worked to our advantage, as the harvesting and sowing windows tend to be different. Our organic crops tend to be fit to cut ahead of Giles’s because we don’t use fungicides, which means they ripen sooner. And we drill later because we aren’t allowed to spray for BYDV.

“The agreement also gives us much more flexibility to expand should we see opportunities.”