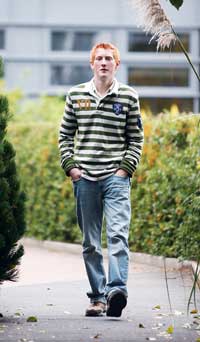 The dust has yet to settle here and some form of reality to return after a hectic start to my university years.

Late nights dancing in the Student Union bar and early morning lectures seem to have become something of the norm.

Leaving Somerset to come to Harper quickly became a distant memory – as did any initial nerves and worries, which were soon washed away after several pints. Left-hand drinking – one of the popular games in the bar – certainly takes some getting used to.

Fresher’s Week, all 12 days of it, was packed fall of activities, socials and banter which was rounded off with a fantastic fresher’s ball.

The event had a WWII Victory theme, which saw students and guests in black tie and ball dresses, as well as traditional military uniforms.

The infamous “Freshers Challenge” more than lived up to its expectations of a terrifying experience. I feel obliged to keep exact details secret – but picture students crawling around in molasses with eggs flying millimetres above their heads in the dark. Oddly, most still commented on how much they enjoyed the experience. Bonding, I guess.

Fancy dress is compulsory here at Harper, particularly on Wednesday nights with fines imposed for those who fail to enter the spirit. One of the best opportunities so far has been the “Hookers and Haymakers” theme. It’s fair to say that you don’t often see so many flat caps, stockings and wellies in one place.

Another memorable fresher’s activity was the stretcher race. Teams bodged together stretchers out of whatever they could lay their hands on and these stretchers were then carried – or more often, dragged – around the rugby pitch stopping at “bases” and encouraged to down mixtures. Sour milk after Weetabix and chilli is not a pleasant combination, especially when out of breath.

Demolition is under way on a building next to the canteen to make way for the new student services centre. As a result much talk among my friends revolves around this, and in particular on we feel we could do a better job.

On a more serious note, I am studying for a BSc degree in Agriculture with Mechanisation. The course is spread over four years, with year three spent in the industry on placement.

All students studying an agriculture course at Harper study the same modules in year one – useful for those coming from a non-farming background, like myself.

The course is split between lectures and smaller tutorial groups with a large emphasis on “learning through doing”.

Concentrating in an IT systems tutorial is particularly difficult, not helped recently by a local silage contractor providing a distraction every few minutes. The rumble of a tractor saw students turn towards the window to get a glimpse of the tractor before it went by.

I am really enjoying the mechanisation tutorials. Testing a tractor’s power on a dynamometer is always popular with a bunch of tractor-mad students.

With an ever growing line up of activities, socials and lectures – as well as Wednesday nights in the SU bar planned – it appears this hectic lifestyle is not about to end any time soon.