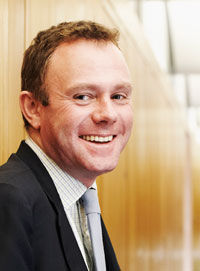 The Conservative party has denied claims it is backtracking over plans to implement a supermarket ombudsman to monitor the relationship between suppliers and retailers.

At the party’s conference in Manchester this week, both shadow DEFRA secretary Nick Herbert (pictured) and shadow farm minister Jim Paice have expressed the need for a tighter retailer code of conduct.

However, both have fallen short of backing farming industry calls for the implementation of an ombudsman, despite claims earlier this year that the party wholeheartedly backed plans to form one.

Speaking at an NFU fringe event on Monday (5 October), Mr Herbert said public interest was not being served by the current balance of power between retailers and farmers.

But he added: “As to whether we need an individual ombudsman – we are discussing that with the NFU and that’s debatable.

“The important thing is to have a strong and enforceable code of practice.”

At a fringe event on Tuesday, Mr Paice insisted the party was not backtracking on the ombudsman proposal or the need to “robustly” enforce the code of conduct.

“We can play with words but that means there will be a role for an ombudsman, but we can’t say at this stage how its best enforced and who it should be,” he told party delegates and industry representatives.

“Whether it should be free-standing or whether it could be incorporated into an existing body.

“The role of an ombudsman is clearly there and that hasn’t changed at all.”

However, John Gummer, former Conservative farm minister, asked whether creating another quango was the right thing for the Tories to do.

“Lots of quangos start for a good reason and end up being extremely restrictive,” he said.

Using the Foods Standards Authority as an example, Mr Gummer said it had become a “nannying body” rather than an organisation which ensured food was safe to eat.

“I hope that we will look seriously at the way in which we do this,” he added.

“Whoever says it can be run for £5m must be absolutely barking,” he added.